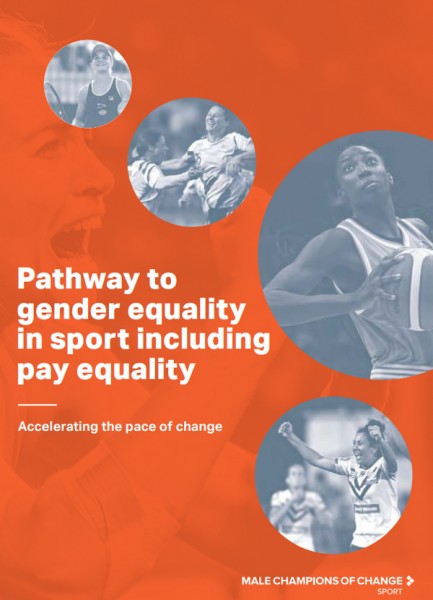 A new vision for gender equality in sport and comprehensive, national scorecard tracking progress will be released at an International Women’s Day Forum being held at the MCG this Sunday prior to the T20 Women’s World Cup final.

Chief executive of Australia’s major professional and participation sports have developed the approach towards the vision of 'No Boundaries for Women and Girls in Sport' by 2025.

In a world-first, members of Male Champions of Change (MCC) Sport have worked with McKinsey & Company to develop and report against five key focus areas and more than 20 measures identified as critical in driving progress on gender equality including pay equality in sport. The MCC Sport 'Pathway to Gender Equality in Sport including Pay Equality' is the first time globally that sector leaders have united to agree and report on a consistent set of measures and assessment criteria towards these goals. The approach will be profiled globally as part of MCC Sport’s commitment to join UN Women’s 'Sport for Generation Equality' initiative, which brings together members of the sport eco-system from around the world to drive gender equality in and through sport.

Collective results across the 18 members of MCC Sport include:

4. Investment
• 22.8% of promotional/marketing spend is dedicated to women in sport/women's competition
• 49.4% of budget is dedicated to building women in sport at elite level
• 87.5% provide equal access to extended resources, e.g. doctors, physios and equipment, for elite female athletes
• 81.3% have an equal travel/ accommodation policy across genders

The Australian Women in Sport Advisory Group (AWISAG), convened by business leader and philanthropist Susan Alberti and chaired by Professor Clare Hanlon from Victorian University, will also officially launch its 'National Roadmap for Women and Girls in Sport” at the forum. Members of MCC Sport are supporting its ‘No boundaries’ vision and will contribute to achieving the strategic priorities outlined in the plan.

Commenting on the initiative, Elizabeth Broderick, founder of Male Champions of Change Sport and Convenor of MCC Sport, stated "it’s an extraordinary time for women in sport in Australia, and this report demonstrates that our sports leaders are committed to robust systems and strategies to build on this success and ensure it is sustainable.

“'The Pathway to Gender Equality in Sport including Pay Equality' provides a granular view of the current state of gender equality in our major sports and highlights where focused action is required.”

“The report shows we need to get more women in leadership in sport, especially in coaching and high performance roles. At the same time, we need to build participation, pathways and investment particularly in those traditionally maledominated sports where women are only just getting opportunities to compete at an elite level.”

“And while a number of Australian sports have led the way globally on pay equity for elite women athletes, there is a clear opportunity for the entire sports ecosystem to get behind the drive for equal pay.”

“Gender equality and pay equality in sport won’t happen through good intention or token efforts. When you invest in and develop women and girls equally with men, the market expands, the whole sport lifts and success follows.”

Susan Alberti, business Leader, philanthropist and Convenor of the Australian Women in Sport Advisory Group added “I so often still see sports organisations at grass roots, state and national level really struggling to envisage what true equality looks like and how to get there.

“Through our National Roadmap, 'No boundaries for women and girls in sport', we’ve set out a shared vision, a business case developed by PwC and set of actions that can be used by sporting organisations at local, national and international level to help us drive change.”

“Working with these industry leaders, we now have a comprehensive blueprint for gender equality that the entire sector can customise to their specific needs.”

Male Champions of Change Sport (MCC)
MCC Sport was established in May 2015. Members lead organisations that have incredible reach and influence in Australian society and internationally. The group includes representatives from every major national sporting organisation in the country and some of Australia’s largest and most successful sporting clubs. Members work within and across their organisations to advance gender equality. The group’s priorities include advancing women in leadership; creating respectful and inclusive sporting cultures; and pay equality.