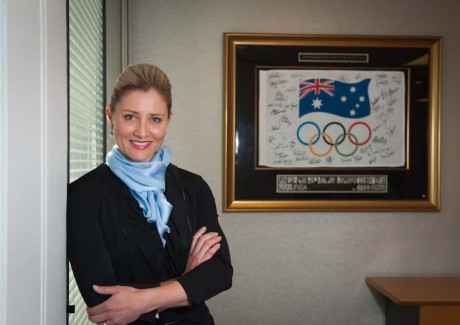 de Jong, a lawyer, has been with the AOC for ten years in the role of Director of Sport.

She replaces Craig Phillips who resigned as Secretary General in June after 23 years of service at the AOC, becoming the first woman appointed to this role in the history of the AOC.

Commenting on her appointment, de Jong stated “I thank John Coates and the AOC Executive for their trust and support and I will relish this new challenge.

“I’ve always been passionate about sport and I have a huge desire to advance the AOC and the Olympic Movement. I can’t wait to get back to work.”

de Jong is currently on maternity leave following the birth of her first child, Alessandro.  She will commence in her new role on 7th October 2014.

AOC President John Coates added “our organisation is very focused on succession planning and after ten years operational experience with the AOC Fiona is totally prepared to assume the role of Secretary General.

“Fiona has developed a close working relationship with our member sports, she understands perfectly their needs and she will continue to forge stronger ties with the sports and our other key stakeholders in her new role.”

During her time at the AOC de Jong has assumed much of the AOC’s legal work particularly around Team Agreements, its many by-laws, selection disputes and anti-doping matters.

In 2013 she graduated from the Harvard Business School’s Advanced Management Program.

A former international triathlete, she is driven and balances her ever-busy schedule with ease, stating “I thrive on the challenges and the deadlines and I still find time to train and devote time to my family.

“I can’t wait to get involved with the planning for Rio 2016 and work with Kitty Chiller, the Chef de Mission and her Team.”

Image courtesy of the The Australian Olympic Committee, www.olympics.com.au