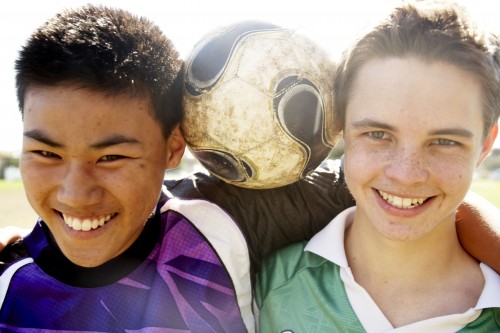 Football Federation Australia (FFA) has announced the establishment of a Multicultural unit, and a new participation program that looks to engage with multicultural communities across Australia.

The program, funded by the Federal Department of Social Services and supported by Senator Zed Seselja, the Assistant Minister for Multicultural Affairs and Social Services, will see the ALDI MiniRoos program delivered in multicultural communities in Western Sydney, with a focus on new arrivals.

FFA Chief Executive David Gallop acknowledged the timeliness of the announcement, advising “with the Caltex Socceroos in action against the Syrian national team today, it is a reminder that football is the world game, understood and played by people across the globe irrespective of race, religion, language or background.

“That universal understanding shows that football has a very important role to play in bringing together all communities in Australia, as well as helping new arrivals settle in the country.

“We are looking for this program to act as a bridge, connecting multicultural participants and new arrivals to pre-existing grassroots community clubs, much like how ALDI MiniRoos functions for young children now.”

“Establishing a multicultural unit is a very important step for football, and we are looking forward to working with a number of partners to use our game’s full potential to engage multicultural communities in a positive way. The 2015 AFC Asian Cup united the fantastic multicultural diversity in Australia, and our intention is that this new unit and program will do the same.”

The announcement of the program was attended by Senator Seselja; Violet Roumeliotis, Chief Executive of Settlement Services International, Mark Falvo, FFA Head of Corporate Strategy, International and Government Relations and Western Sydney Wanderers player Abraham Majok, who arrived in Australia from overseas at a young age.

Senator Seselja advised “football is a common interest for many newly arrived migrants and multicultural communities.

“Taking part in football will enable these families to connect with other migrants and the mainstream community.

“I am delighted that the Government and FFA can work together to make a real difference in the lives of children and their families who have moved to Australia to build a new life.”

The new Multicultural Unit will report to Emma Highwood, Head of Community, Football Development and Women’s Football, and the implementation of the program will begin over the coming months.