In contrast to Football Federation Australia (FFA) figures that show considerable growth in female football participation over recent years, Roy Morgan Research for the period between April 2010 and March 2015 showed that the number of Australian women playing football either regularly or occasionally grew only slightly from 373,000 to 378,000.

Women’s football participation in Australia: 2011 vs 2015 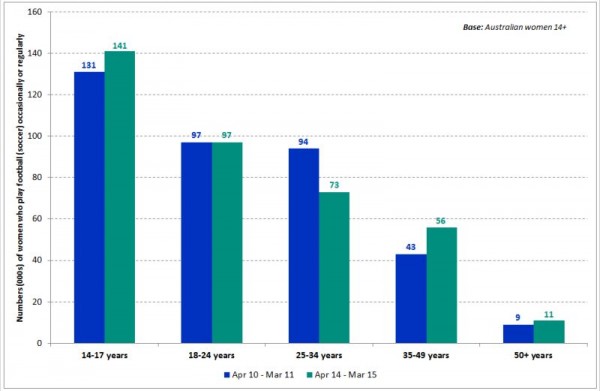 Furthermore, women aged 50+ are the only group which is as likely to watch football on TV now as they were five years ago (14% of them tune in for the sport, as they did in 2010).

“Australia’s reputation as a footballing nation lags behind our global prominence in other sports, making our women’s team’s victory over Brazil on Sunday all the more historic.

“While the last five years have seen a marked increase in the number of Australian men playing the beautiful game, the same cannot be said of women.

“Overall participation has grown by just the slightest of margins, driven mainly by women aged 35-49 and 14-17. In contrast, the number of men playing the sport has increased across all age groups except the under-18s.

“As we reported recently, soccer (football) is the second-most popular sport among Australian kids aged 6-13, with nearly 40% of girls this age taking part.

“Sports participation inevitably drops off among Aussies aged 14+, so it remains to be seen whether the Matildas’ success will inspire the current crop of footballing girls to stick at it during their teens.

"It will also be interesting to see how the participation rate looks for Aussie women a year from now, and whether the Matildas’ historic World Cup performance has resulted in more women taking up (and viewing) football."