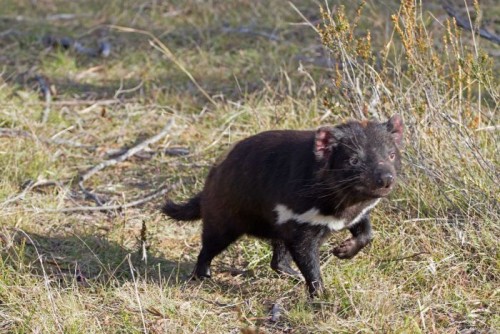 A fence and a canal will keep a newly released batch of Tasmanian devils off roads and separate from diseased animals in Tasmania's south east.

The Tasmanian Parks and Wildlife Service this week released a group of 39 devils from sanctuaries in NSW and Victoria on the Forestier Peninsula.

The devils were removed from the peninsula in 2012 when deadly facial tumour disease (DFTD) was discovered in the area.

The healthy devils were flown from Barrington Tops in New South Wales and Healesville in Victoria.

Earlier this year, 20 devils were released in the state's north but four became victims of roadkill within days.

Tasmanian Environment Minister Matthew Groom said the program operators were learning from previous experiences, stating "it was a matter of great regret that a number of the Devils released at Narawntapu were lost to roadkill and this has been a strong reminder that roadkill is also an ongoing threat to the endangered Tasmanian Devil.

"A devil-proof fence has been built at Dunalley and this, together with the natural barrier of the Dennison Canal, will ensure that the facial tumour disease will not be able to find its way back on to the Peninsula."

Bates explained "devils have always lived on Forestier but their numbers have fluctuated since European settlement.

"DFTD was detected in 2004 and, after an unsuccessful attempt was made to remove the infected devils, the entire area was depopulated to ensure it was disease-free."

Top image: A captive-bred Tasmanian Devil shortly after it release. Courtesy of DPIPWE.

28th July 2010 - WILDLIFE ARK TO BE CREATED IN HUNTER VALLEY