The Tasmanian Government has announced that it will spend an additional $8 million on infrastructure maintenance in the State’s national parks and reserves.

The announcement, made in advance of the coming Tasmanian State budget comes against a backdrop of funding cuts to the Tasmanian Parks and Wildlife Service.

Unions have claimed that up to 30 jobs will be axed as the service tries to reach savings target set by the Tasmanian Government.

Tasmanian Minister for Environment, Parks and Heritage Matthew Groom rejected that claim, saying that less than 10 jobs will go while new money will be spent on refreshing infrastructure in highly visited areas.

Minister Groom explained “this additional funding will provide for the redevelopment, refurbishment and replacement of high priority infrastructure in Tasmania's parks and reserves including signage and interpretation, walking and multi-use tracks, roads, fire trails, amenities and car parking.

"Having the right infrastructure is vitally important for enhancing visitor experience, as well as facilitating good management outcomes such as improving visitor safety and providing additional protection to sensitive values.

Tom Lynch from the Community and Public Sector Union (CPSU), representing Parks and Wildlife workers, said the maintenance would have been done last year if the Tasmanian Government had not cut the Parks budget.

Lynch told the ABC “in last year's budget (the Government) removed $12.5 million from Parks and Wildlife and now he's putting some of that back.

"I would call on him to put it all back, our Parks service is desperately in need of additional funding, this is insufficient.

"Last year and the year before they had to cut their program of maintenance because of the budget cuts and now the minister says 'well, I'll give you some money to do maintenance'.

"The last couple of weeks I've received a whole range of photographs of infrastructure around the Parks service - failing bridges, culverts, roads collapsing, I've seen pictures of road barriers that are condemned that keep tourists away from very steep falls.

"And if you put the pressure on Parks because they simply don't have the resources, they close the site.

"There's a case at the moment down at Remarkable Cave, where the road barrier has been condemned it should have been removed and replaced.

"Instead its there doing an ineffectual job separating tourists from a plummet into the ocean." 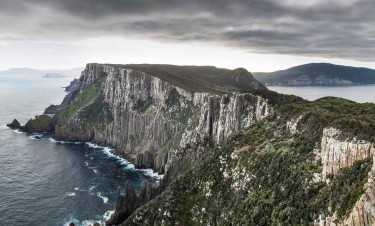 DST Chief Executive Melinda Anderson said the funding recognised that Tasmania's natural environment was one of the state's most significant tourism assets.

Anderson stated “over 37% of international and interstate travellers to Tasmania visited one of our national parks in 2014 and nearly 50% participated in bushwalking and other walks.

"Accessible nature and wilderness is a key driver for visitors to Tasmania and we need to ensure the experiences we offer our world class.

"Roads, parking, signage, interpretation, tracks and other visitor amenities are all part of delivering a quality, natured-based experience and ensure sustainable management of our natural assets."

The Tasmanian Government has set a goal of 1.5 million visitors to the state by 2020.