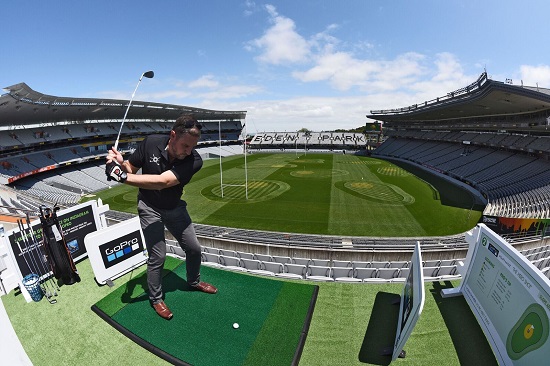 The second ASB G9 event at Eden Park has just concluded to amazing reviews. Following the success of the inaugural ASB G9 in November 2017, ASB G9 2018 once again saw Auckland's iconic Eden Park stadium converted to a unique nine-hole golf course from 3rd to 10th November. The event saw 2,880 people compete for a share of $50k worth of prizes, including the coveted ASB G9 Yellow Jacket. Players were able to tee off from nine different locations around Eden Park with a bonus longest putt competition in the home team changing room.

“As the sports and entertainment landscape continues to evolve and stadia are challenged to find new and innovative usages of idle capacity, we are constantly considering new concepts that can be adapted to increase Eden Park’s utilisation,” said Nick Sautner, Eden Park Chief Executive Officer and G9 Founder. “Golf is the highest club participation sport in New Zealand so what better way to showcase the diversity of our national stadium?”

The ASB G9 event was also identified as the ideal corporate hosting opportunity for the venue with Eden Park easily accessible, with plenty of parking and the Clubhouse providing the perfect viewing area for spectators to watch their colleagues and clients enjoying their golf. Sautner says there was no negativity about potentially detracting from the park’s proud rugby history. “Quite the contrary. Eden Park is New Zealand's national stadium and the world’s most famous rugby venue according to Google.  Its rich sporting history and global profile made the stadium perfect for the ASB G9 concept. Most visitors to Eden Park could only ever dream of emulating the feats of the all-conquering All Blacks and BLACKCAPS.”

Sautner initially held meetings with the Eden Park Turf Manager (Blair Christiansen) and Business Development Manager (Ben Svensen) to seek their thoughts and insights on the concept. Golf Warehouse were also approached for input and support. ASB came in as the naming rights sponsor and were keen from the start. “ASB has a long association with Eden Park and a willingness to support new initiatives,” explains Sautner. “ASB identified the G9 as an ideal event to engage their customers.”

Hole partners also came on board relatively swiftly and discussions for 2019’s event have already commenced with all partners including ASB to extend their association with what has to be one of Australasia’s most innovative events. Registrations for next year’s event have also already opened.

Over 25% of the ASB G9 2018 event participants had never played golf previously. A figure that resulted in New Zealand Golf CEO Dean Murphy being only too pleased to be part of the event. “We are always looking for new ways to grow the game of golf in New Zealand and this concept created by Eden Park showed golf in a fun and unique way. The ASB G9 event was also very accessible which will hopefully lead to many new players picking up a golf club, some for the first time, and where better to do so than on Eden Park?”

Well-known participants included Grant Fox, Israel Dagg, Gemma McCaw, Phil Tautarangi, as well as numerous media personalities including Guy Heveldt, Shayne Currie, Marc Peard. Sautner sees the success of the event of being the start of something that may grow into a global phenomenon. “We are exploring the opportunity to attract global golf fanatics to attend next year’s event,” he says. “Many international sports fans have Eden Park on their bucket list and we intend to target these individuals for future events. "Our team is committed to challenging perceptions of how stadia infrastructure can be utilised. Embracing change and modernising our operations by incubating events like this enables Eden Park to evolve, contribute to the local economy and support Auckland's role as one of the most liveable cities in the world"

Further details on ASB G9 2019 can be found on the Eden Park website. Visit: http://www.edenpark.co.nz/asbg9