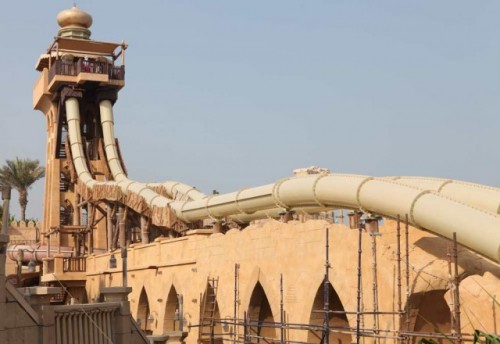 The 33 metre high slides start at the top of a six storey high tower from where riders can get a 360 degree view of the landmark Burj Al Arab hotel and Dubai's skyline.

Standing on a trapdoor they are released rapidly descending down the 120 metre slide through a tunnel at a speed of over 80 km/h.

The new slides are one of 30 attractions at Wild Wadi, 13 of which are inter-connected, to allow riders to experience one after another without leaving the water.

The waterpark is designed around a tale from Arabian folklore featuring Juha and his seafaring friend, Sinbad and attracts 890,000 annual visitors.