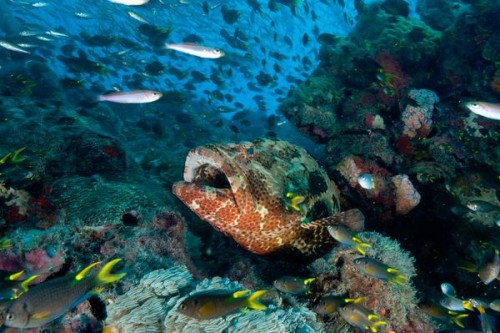 A newly released draft plan "to establish a world-class management program for Australia’s marine parks in Commonwealth waters" has been released by the Federal Government's Director of National Parks.

Federal Minister for the Environment and Energy Josh Frydenberg has described the independent consultation as being "part of the Coalition Government’s commitment to delivering a well-managed marine park estate which balances various needs and uses such as fishing, tourism, conservation and Indigenous use."

The draft plans cover Commonwealth waters off the coast of NSW, Queensland, Western Australia, South Australia and the Northern Territory.

Minister Frydenberg states "with 36% of waters around Australia covered by marine parks, we have surpassed the United Nations target of 10%.

"Our level is more than many other countries with significant marine jurisdictions such as the France, Canada, Mexico and Chile.

The proposed plan includes no changes to the boundaries of Australian Marine Parks, instead it proposes, according to Minister Frydenberg “a targeted zoning approach to allow sustainable activities like commercial fishing while protecting key conservation features.”

The targeted zones include:

Yellow: ‘Habitat Protection Zones’ where fishing is allowed as long as the seafloor is not harmed

Minister Frydenberg added “this is a much more balanced, scientific approach than those previously undertaken for marine parks. These plans protect what needs to be protected, without negatively impacting communities and our country’s economy.”

However, writing in The Conversation, marine scientists Professor Jessica Meeuwig and Professor David Booth are critical of the targeted zoning proposals, writing that it is “based on an unsubstantiated premise: that protection of Australia’s ocean wildlife is consistent with activities such as fishing and oil and gas exploration.”

The pair highlight that the plans ignore recommendations made in a 2012 review of Australia’s network of marine reserves expressing concerns over the extent of the ‘green zones’.

They explain “the extent of green zones is crucial, because the science says they are the engine room of conservation.

“Fully protected marine national parks – with no fishing, no mining, and no oil and gas drilling – deliver far more benefits to biodiversity than other zone types.

“The best estimates suggest that 30-40% of the seascape should ideally be fully protected, rather than the 20% proposed under the new plans.

“Partially protected areas, such as the ‘yellow zones’ that allow fishing while protecting the seabed, do not generate conservation benefits equivalent to those of full protection.”

The draft plans can be accessed at www.parksaustralia.gov.au/marine