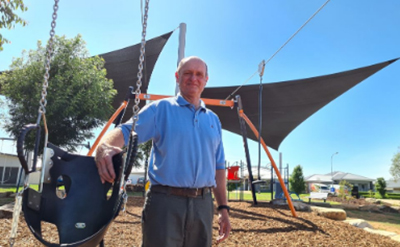 A double shade sail has been installed over the existing playground to complete Wagga Wagga’s transformation of its Gobbagombalin Parklands  providing much-needed shade to playground users as the temperature heats up heading towards Summer.

Creighton advised “the overall budget for the project was $500,000, with the design and development work prioritised to meet community requests and available budget.

“We wanted to develop a space which would be family friendly and would draw in people from the northern suburbs and from across the city, and I think we’ve achieved that aim.”

The initial stage of works included a 10metre x10metre basketball court and single cubicle toilet near the existing BBQ shelter and playground, three new shelters with a table setting, along with landscaping and improved irrigation.

Works and Playground Officer John Conlan said Council also extended the path network to complete a circuit around and through the park, improving access to the various elements for all users.

Conlan added “we’ve installed four fitness stations around sections of the park, as well as a couple of combo goal posts for soccer and rugby league so they can come out and play socials games.

“One of the exciting elements added is the 25-metre long double flying fox with a special seat for toddlers or children with a disability.

“There’s also the new bike jump track and now the double sail over the existing playground to provide more shade so families can stay there a little bit longer out of the sun.

“All elements seem to be hitting the right note, with people moving between the flying fox, the jump track, playground, basketball court and exercise stations.”

Wagga Wagga Council will plant some more advanced deciduous tree around the perimeter of the park in the new year.

It will also construct an off-leash dog park in the basin on the corner of Yenda Avenue and Paradise Drive after the adjacent drainage dam extension works are completed.