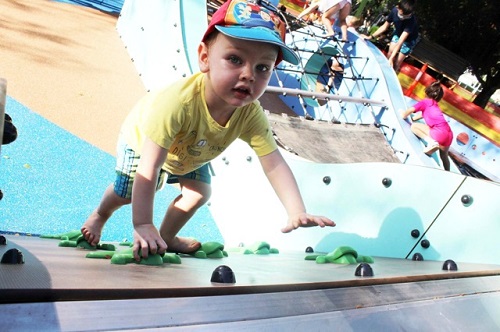 The Waterfront Park children’s playground in Darwin has been announced as the first Northern Territory playground to secure Gold at the Kidsafe National Playsafe Design Awards.

With the Kidsafe initiative recognising excellence and innovation in the provision of safe and creative playspaces, the Darwin Waterfront playground was awarded 2018 Winner of the Public Playspace (Category A) up to $500,000, pipping over 48 entrants to the post in its nominated category.

Commenting on the recognition, Kidsafe NT Chief Executive, Kellie Shewring stated “the project won because the judges agreed that this is a very exciting playground which caters for young children and their families, providing facilities that encourage everyone to stay and play.

“The equipment is not ‘traditional’ and promotes imaginative and explorative play against the backdrop of the beautiful Darwin Harbour.”

The playground was opened in 2017, but closed shortly after due to reports of some play elements getting too hot. In response, the Darwin Waterfront Corporation added a permanent shade structure over the playground, as well the adjacent walkway and seating area. 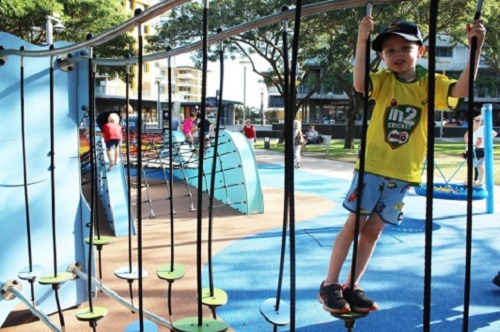 Shewring added “it’s not uncommon for playgrounds to experience issues when they first open, but the response by the Corporation to rapidly address has resulted in an improved attraction that is now very popular for families.”

Waterfront Park is open 24 hours and caters for children between two to eight years, complete with subtle lighting, CCTV, free Wi-Fi and is recognised as a breastfeeding friendly venue by the Australian Breastfeeding Association.

Waterfront Park’s play structure was provided by Proludic with the shade structure installed by Shade and Play NT.

The Kidsafe National Playspace Design Awards are held every two years and are open to playground owners, service providers, design professionals and landscapers from across Australia.

Among 19 Award winners and recipients of Highly Commended and Commended awards, the category winners were:

Darwin City Council is also set to add a rainbow garden at The Esplanade and Daly Street roundabout to complement the popular rainbow crossing that exists at the city’s Knuckey Street and Smith Street intersection.

The idea for a rainbow garden was adopted by the Council following a suggestion by Darwin Pride as part of Darwin Pride Festival celebrations.

Click here to view a case study from Proludic on the Waterfront Park play structure installation.