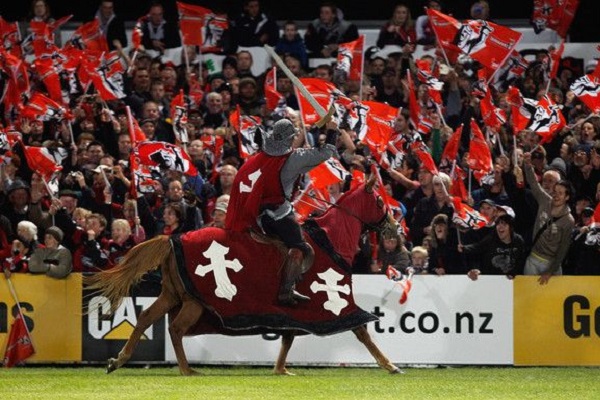 New Zealand's most successful provincial rugby side, the Crusaders, have decided to keep their name - after a review that began when 51 people died in the Christchurch mosque attacks in March this year.

However, as a result of the review it will be dropping the use of its knight and sword logo.

With concerns over the brand name's association with historic religious wars between Christians and Muslims, the club saying it stood for crusading for social improvement and inclusiveness.

In a statement, the club advised "it was decided that no name better represented the club's commitment to living its values - crusading for social improvement and inclusiveness, and crusading with heart for our community and for each other."

Presenting its new logo at a news conference today, the club advised it would seek to "reclaim its meaning through a new brand", with Crusaders Chief Executive Colin Mansbridge stating "the imagery we were using, with its nod to Christchurch's English heritage, did not effectively portray the region we represent or who we are as a team."

The new logo, which the club will introduce for the 2020 Super Rugby season, includes a Maori proverb - "ma pango, ma whero, ka oti te mahi" - meaning "with black, with red, we can achieve".

The Christchurch club - who have won the southern hemisphere provincial rugby title a record 10 times - adopted their name 23 years ago, when rugby went professional.

On 15th March 2019, a gunman opened fire on Muslims during Friday prayers at the Al Noor mosque and the Linwood Islamic Centre, both located in Christchurch.

As a result, 51 people were killed and dozens injured.

At the time, the club was quick to stress the name was "not a religious statement", but said it would look into possibly changing the name.

It also ended the practice of having sword-wielding knights riding on horseback into its home venue before matches.

Image: Sword-wielding knights riding on horseback at the Crusader's home games in past years (top) and the team's new logo (below).