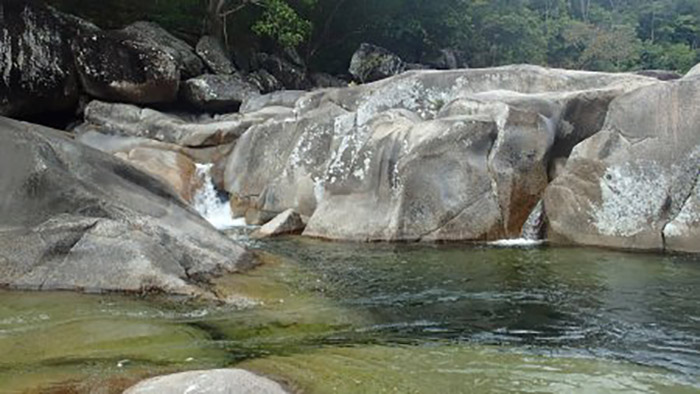 The dangers of swimming in local waterways during the Cairns wet season have been highlighted through a series of recent rescues at a single Aloomba causeway.

The causeway, which crosses under Moller Road, is in the lower reaches of Behana Creek and is a popular swimming spot for local families.

There have been at least two recent incidents where young swimmers have had to be rescued from fast-flowing waters at the popular swimming hole, which is affected by strong currents during the wet season.

Cairns Regional Councillor Brett Moller was just 13 years old when he made his first rescue at the causeway that shares his name, recalling "my brother, a school mate and I pulled three young kids out who were sucked through the pipes. One was just a toddler.

“There have been many such events and many I have witnessed as well since then. My daughters witnessed one of the recent incidents.”

In the first rescue, two Council staff members came to the aid of a teenage boy who was trapped by fast-flowing waters.

The boy had been tubing with friends on Behana Creek when his tube flipped and he was dragged under by a strong current and trapped against a drainage pipe that allows water to flow under the roadway.

The Council employees, who were driving through the area, noticed the boy was in trouble and rushed to help.

They successfully assisted the boy, who sustained only minor injuries.

Moller said there had been other incidents where swimmers had been sucked into the drainage pipes by currents and emerged on the other side of the road, adding "there are signs saying to stay away from the pipes, but it seems people just don’t pay attention to the dangers.

“The message has got to get out there – our waterways might be beautiful, but they are also dangerous, especially during the wet season.

“Water levels can rise without warning and currents can be very strong, even if there hasn’t been rain for a few days. The problem with currents is that you might not realise how strong they are until you’re in one and then it’s too late.”

Cairns Mayor Bob Manning said swimming in rainforest creeks was considered a rite of passage for locals, but caution was needed.

Mayor Manning concluded “when the weather is hot and you have pristine rainforest swimming holes in your backyard, it’s pretty hard to resist. We want people to enjoy the outdoors and the natural attractions that make our region so special. But we want them to do so safely.

“Never swim in any creek, river, causeway or drain during or after rain and check for currents before you enter the water. And - it goes without saying - always supervise kids around any waterway.”