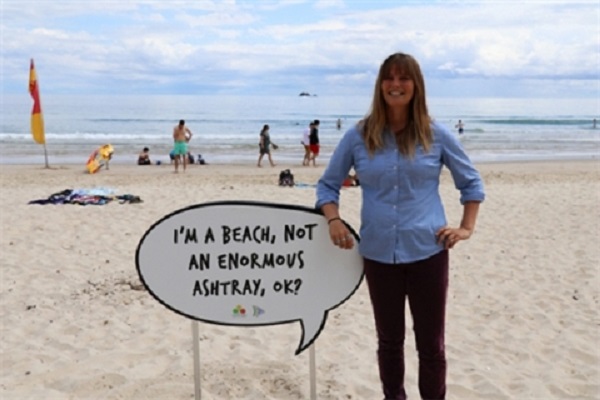 Byron Shire Council in northern NSW is undertaking a series of litter blitzes on its beaches until the end of March with Councils rangers taking strong anti-cigarette litter messages to the public as part of the 'Butt Free Byron Shire' campaign.

The campaign is supported by a $100,000 Environmental Protection Authority (EPA) grant to conduct a program of education and compliance.

Explaining the initiative, Byron Shire Council Waste Education and Compliance Officer, Kate Akkerman advised "we know that cigarette litter is a serious problem and, as it takes around five years to break down in seawater, it can have catastrophic consequences for our marine life and environment.

“That’s why we are serious about keeping cigarette litter off our beaches and out of our waterways and our compliance team is out and about on beaches and foreshore areas talking to people about the size and impact of our litter problem.

“Many locals and visitors would be unaware that it is now illegal to smoke on beaches in the Byron Shire and that you will be warned and can be fined if you’re caught smoking or littering.

“We hope a bit more education on the ground will produce better understanding of the negative impact of cigarette litter and reduced rates of this harmful littering."

The Council is asking beach users to:

• Be responsible for their own litter and to think about where they will dispose of their butts before lighting up.
• Not to smoke on the beach. To leave the beach for a smoke and use the bins provided.
• Not to leave butts in the hinterland either – it is just as important as the coast. Litter and other pollutants wash into stormwater drains when it rains.
• Use the butt bins provided when possible. It is easy for butts to escape the regular litter bin when it is serviced.