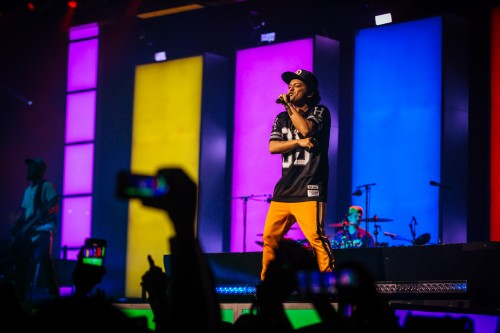 The Bruno Mars 24k Magic World Tour has set a new record for the highest audience attendance at Auckland’s Spark Arena for a concert artist, attracting 48,783 fans from around New Zealand across the four nights.

Presented by Live Nation, Mars sold-out shows at Spark Arena on 27th and 28th February and 2nd and 3rd March.

Commenting on the success of the event, Michael Coppel, Chairman of Live Nation Australasia stated “it was a thrill to watch Bruno and his band practice their own particular brand of magic for New Zealand fans for four stunning nights.”

“We thank you for the four incredible shows you played here, and for giving your New Zealanders, who travelled from all over the country, an unforgettable experience that has now officially gone down in history.”

Returning to New Zealand after his highly acclaimed shows at the same venue in 2014, the pop sensation left no doubt as to his phenomenal stage presence and vocal prowess.

Comments from critics who loved the show included:

“This seems like a big call, but Bruno Mars' show might just be the best live show I've ever seen in New Zealand” - NZ Herald

“Not a soul left Spark Arena thinking the man can’t belt them out, his vocals shone” … - Stuff

The previous venue record was held by Beyoncé with 44,596 tickets sold across four shows during the ‘The Mrs. Carter Show World Tour' in 2013.

The Bruno Mars tour marks what is shaping up to be another busy year at Spark Arena with a number of major tours that have already played the venue in recent weeks, including Roger Waters, Robbie Williams and Queen + Adam Lambert, with several other major multi-night concert tours announced for later in the year, including P!NK, Katy Perry, Celine Dion and Sam Smith.