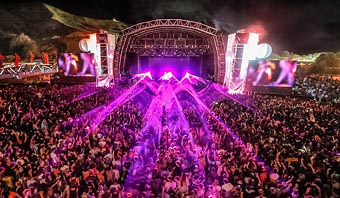 Hamish Pinkham, the entrepreneur whose Gisborne Rhythm and Vines Festival was voted one of the best places in the world to celebrate New Year's Eve, has won the 2013 PATA Young Tourism Leader Award.

Pinkham, Director of The Rhythm Group, described as New Zealand's leading festival promotion company, founded Rhythm and Vines at age 21 while a student at the University of Otago.

With a vision to create a safe New Year's Eve festival for friends, the first event hosted 1,800 people in 2003. It recently celebrated its 10 year anniversary, hosting 30,000 people over three days, including 8000 on-site campers.

The company now employs 12 full-time staff plus an event delivery team of up to 2,000 at the Rhythm and Vines Festival.

Pinkham is expanding his business, staging a second event, Rhythm and Alps, in Wanaka this year. He has also purchased the Gisborne Wine and Food Festival, rebranding the event as Feast Gisborne.

"Its growing success and the expansion of his business clearly demonstrates the power of events to stimulate regional economies.

"I would also like to acknowledge our finalist, James Fitzgerald, Managing Director of Rotorua Canopy Tours.

"It was an extremely close-fought competition, which bodes well for the future of New Zealand tourism."

They aim to celebrate the achievements of leading individuals in the tourism industry.

For more information about the Awards go to www.tourismawards.co.nz