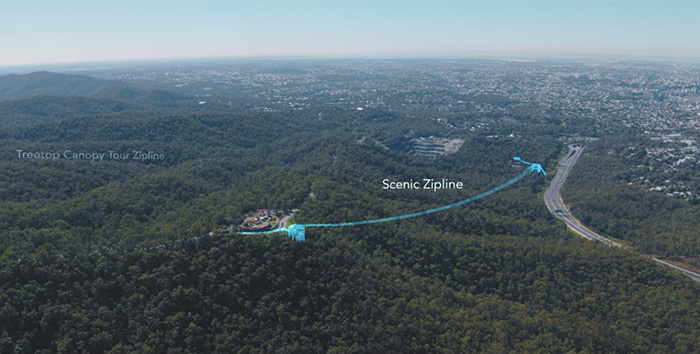 Brisbane City Council has approved the development application for the Mt Coot-tha zip line project as part of its commitment to create a leisure and adventure precinct at Mt Coot-tha, considered to be one of Brisbane's famous landmarks.

It is also part of Council’s commitment to create a leisure and adventure precinct at Mt Coot-tha, one of Brisbane's famous landmarks.

The zipline tour of approximately 1.5 kilometre will take small groups of eight to12 between treetop platforms using zip line technology. The tour will also provide a guided learning experience of Mt Coot-tha’s flora, fauna and indigenous cultural heritage.It will start west of the lookout and finish to the west of JC Slaughter Falls.

The arrival centre will be situated at the former Legacy Way workforce car park located on Sir Samuel Griffith Drive. It will include administration and operations for the zipline. The proposed arrival centre includes 102 off-street car parks zipline customers. This separate carpark complements more than 130 existing on-street carparks. A shuttle service is proposed, not only for zipline customers but also for the general public. This will improve accessibility and connectivity around the mountain, while also easing traffic congestion and the impacts to existing carpark facilities.

The development application was approved on 1st February 2019 and is available to view online via Brisbane Planning and Development Online, application number A005011420.