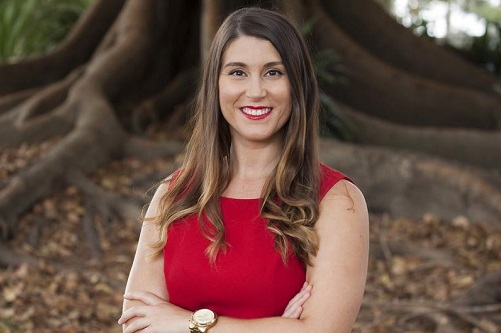 Amy Jozing, Manager Communications and Public Affairs for Sydney’s Botanic Gardens & Centennial Parklands, has been named as the recipient of the Communications Executive Award (Industry) in the 2018 Australasian Leisure Management Communication and Marketing Awards.

Jozing, who manages and oversees the strategy and operations of a high-performance media team, is responsible for the media, communications, issues and stakeholder management and public relations for seven of Australia’s iconic green spaces, which currently receive over 35 million visitors.

Jozing (pictured), who has been in her role since November 2016, having joined the former Centennial Park and Moore Park Trust in 2011, was recognised for her work across these high profile spaces. In particular, the Award recognises how, in 2017/18 she shifted her team’s output from a traditional media function to a forward thinking self-generating, ‘digital-first’ team.

This was done for two reasons: to adapt to the ever-changing digital media landscape by growing and diversifying our content and constantly pushing the boundaries in communications; and to ensure ‘the media’ come directly to us as the ‘go to’ source for credible, accurate, current and popular content.

Since changing to this model, both Trusts have achieved record positive media reach.

Commenting on her role, Jozing describes herself as “a solutions-driven senior strategic communication and public relations professional” while acknowledging that her role includes “mitigating the bad with good.”

She explains “working across high-profile spaces promotes opportunity as well as challenges.

“My team and I play a pivotal role in enhancing and protecting our brand and reputation by mitigating negative stories with proactive campaigns to position our parks and gardens as leaders in science and conservation, horticulture, education, sport and recreation and cultural events through media, communications and digital channels.

“I achieve this through effective communications, community consultations and meetings with key stakeholders to ensure we are collaborative, open and transparent. This is imperative due to the diversity and number of stakeholders surrounding our sites.

“Key issues I have mitigated this year through positive media opportunities include tree planting stories for Transport for NSW on Anzac Parade, (the) $60 million funding announcement to move the NSW National Herbarium of NSW to Western Sydney and revitalisation of our significant heritage assets such as Victoria Lodge at RBG.”

Jozing’s acknowledgement as the Industry’s leading in-house Communications Executive over the past year is, according to Australasian Leisure Management Publisher Nigel Benton, a result of “the exceptional vision and innovative work she has undertaken that has helped Sydney’s Botanic Gardens and Centennial Parklands achieve impressive media exposure.

“She has conveyed the many positive elements of the activities being undertaken by both Trusts while also being highly effective in dealing with scrutiny.”

The Australasian Leisure Management Communication and Marketing Awards acknowledge how the leisure industry - covering aquatics, attractions, entertainment, events, fitness, parks, recreation, sport, tourism and venues - communicates how it entertains, enriches and improves quality of life as well as how it engages with consumers to generate business success and deals with scrutiny.

Having received a remarkable and almost overwhelming number of entries for the Awards, they will be presented in a series of one-on-one meetings over the coming weeks.

RBG's 200 years campaign was an award winner in the 2017 Communication and Marketing Awards.