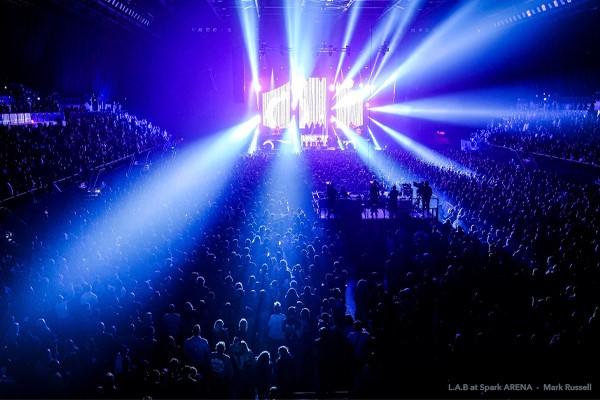 Auckland’s Spark Arena has resumed holding concerts after having played a vital role as a food distributor during Auckland’s COVID-19 response.

Over the last three months as part of Auckland’s COVID response, Spark Arena has played a vital role as a food distribution centre. More than 56,000 boxes of food and essential supplies have been packed and distributed to individuals, families, marae and other community organisations that found themselves in need of welfare support due to lockdown. At its peak, there was a team of more than 80 passionate individuals involved in the operation, made up of those who would normally be working on bringing international acts to the city.

Spark Arena, named in Billboard’s 2019 Arena Power List at number seven in the ‘Top 10 Arenas with a capacity of 12,200' above London’s Legendary Wembley Arena, and its smaller venue The Tuning Fork have been among the first venues in the world to welcome back audiences as global restrictions on mass gatherings largely remain in place. In May this year, The Tuning Fork was one of the first venues globally to successfully host socially distanced gigs.

Spark Arena Executive Director, Stuart Clumpas advised “all of us at Spark Arena are pretty chuffed to be leading the charge to reopen our live venues throughout the world, from the bottom of the world!

“The LAB show on Friday was up there with the best of them; a sold out gig, an audience that departed hot and sweaty with huge smiles on their faces, and a production as good as any overseas act playing at this level. It’s very gratifying after our years of hard work building up local infrastructure to be finally in a position to achieve shows of this calibre with completely local crew and artists.

“We look forward to many more shows in the coming few months, both at the Arena and The Tuning Fork, whilst our business gets back on its feet again”.

Spark Arena General Manager, Brendan Hines added “Fridays L.A.B concert was a much-needed shot of positivity during what has and continues to be a difficult period for the live entertainment industry. Any concerns about ticket demand or ‘the concert vibe’ were allayed, with a big turnout and audiences in great spirits right from the opening act.

“The first concert back at Spark Arena post the COVID lockdown was also important for New Zealand artists and the hundreds of people behind the scenes made up of contractors, suppliers and casual staff whose livelihood is dependent on the live entertainment industry”

For more information go to www.sparkarena.co.nz