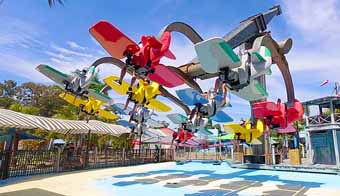 Shares in Ardent Leisure have surged in recent days after group announced strong revenues and earnings in its latest first corporate update.

Ardent’s first update since the surprising appointment of Deborah Thomas as its new Chief Executive in March showed revenue across the group growing by 17.2% to $444.9 million during the nine months to the end of March.

Divisional earnings before interest, tax, depreciation and amortisation jumped 10.9% during the same period to hit $101.6 million.

The result was largely driven by another solid performance by its Main Event family entertainment division in the USA, which increased revenues by 58.3% and like-for-like earnings 10%

The division opened its 20th centre in April and has plans to open a further 15 venues in the next two years.

Ardent said its acquisition of the Fitness First health clubs in Western Australia had not delivered the expected increases in memberships.

The group's theme parks, which include Dreamworld recorded fairly flat revenues and earnings during the quarter.

Ardent described the result as solid given unprecedented rainfall during its key summer trading month of January and the impact of Cyclone Marcia in February.

Ardent also announced that corporate costs would increase by around 20 to 25% for the full-year, including costs associated with the appointment of former group Director Thomas, a former editor of The Australian Women’s Weekly.

Group Chairman Neil Balnaves said that since her appointment Thomas had focused on finding opportunities to innovate and improve products, customer service and sales, since transitioning to chief executive.

Balnaves said “a review of the group's marketing, digital and data capabilities is underway to improve our consumer insights, increase customer numbers and drive revenue.”