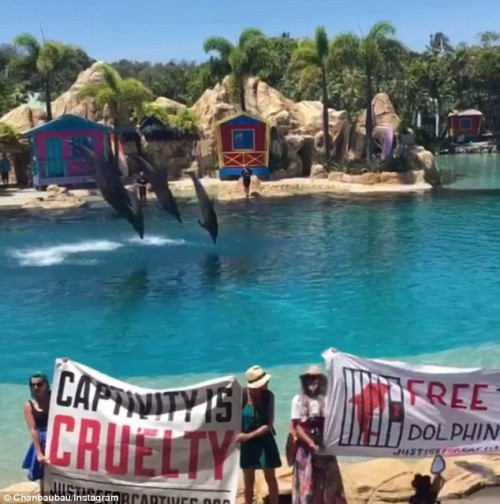 A protest by animal rights activists has today disrupted a show at Sea World’s Dolphin Cove attraction, with a group of about 20 protesters interrupting a dolphin display as part of a campaign against the captivity of animals.

The protesters unveiled banners at the Gold Coast theme park’s dolphin show, highlighting the plight of captive animals. The banners read: 'Animals are not for entertainment’, ‘Captivity is cruelty' and 'Free the dolphins'.

Video of the incident shot by spectators shows close to 20 protesters walking to the front of the viewing area during the dolphin show on Saturday shortly after 11am.

Security arrived within minutes to escort the protestors out a rear entrance and out of the park, to large cheers from the crowd of several hundred people at the dolphin show amphitheatre. 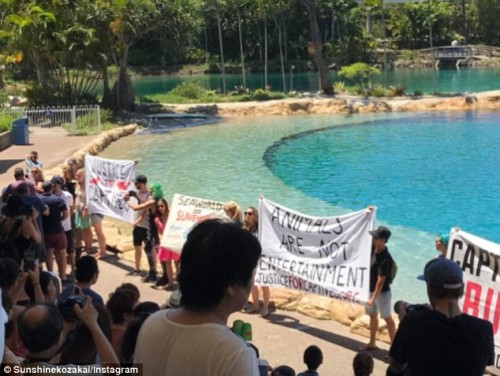 Guests watching the dolphin show were unimpressed at the protest with reports that at least two audience members pushed and struggled with demonstrators in an effort to stop the protest, before tearing down the group's banners.

While the protesters were evicted, no charges have been laid.

In a statement, Sea World defended the treatment of animals at the park.

The statement explained “Sea World is very proud of its world class exhibits including some of the largest filtered natural sand bottom lagoon systems in the world for dolphins.

“The health and wellbeing of our animals is of the utmost priority and we have a strong reputation for caring for marine animals with a health and welfare programme designed to promote a long, enriched life.” 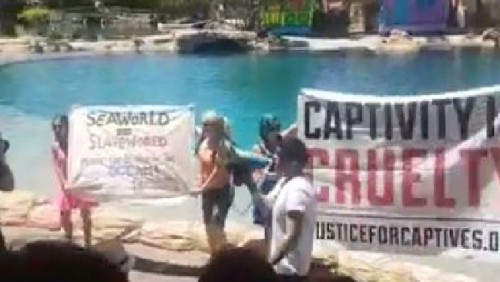 Sea World has a long record of rescueing and rehabilitating marine animals, including dolphins, while backing a range of marine environmental activities through the not-for-profit Sea World Research & Rescue Foundation.

Images of the protest from Facebook/Instagram.