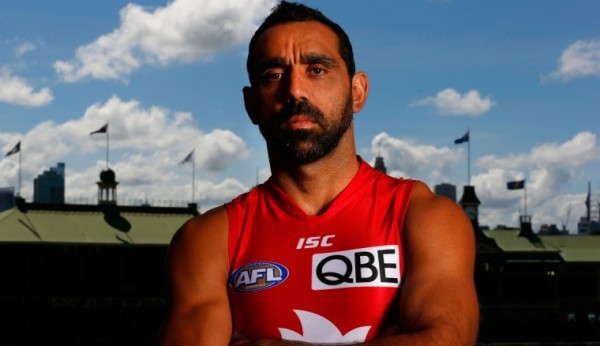 Aboriginal AFL star and indigenous campaigner Adam Goodes has been named the 2014 Australian of the Year.

Goodes was presented the award by Prime Minister Tony Abbott on Saturday night (25th January) at Parliament House in Canberra in recognition of his leadership and dedication to the Indigenous community.

As well as being a decorated AFL player, winning two Brownlow Medals and two AFL premierships, the Sydney Swans star has been actively involved in Indigenous sporting and community programs, and has championed the fight against racism both on and off the sporting field.

According to the National Australia Day Council, Goodes was chosen "for his leadership and advocacy in the fight against racism both on the sporting field and within society - a stance which has won him the admiration and respect of people around Australia."

Describing the Australian of the Year award as "a huge honour" for Goodes said his early experiences with racism had shaped his outlook and spurred his interest in advocacy work.

In his acceptance speech, Goodes stated "growing up as an Indigenous Australian I have seen and experienced my fair share of racism.

"Whilst it has been difficult a lot of the time, it has also taught me a lot and shaped my values and what I believe in today.

"I believe racism is a community issue which we all need to address and that's why racism stops with me.

Goodes urged fellow Australians to take a broader view of race relations, and also to treat "people the way you want to be treated".

"It is not just about taking responsibility for your own actions, but speaking to your mates when they take out their anger on their loved ones, minority groups, or make racist remarks.

"It is about how you choose to give back and make a difference to those around you, your community or your country, that goes outside of just yourself. I believe we are all connected whether we like it or not. We are all equal and the same in so many ways. My hope is that we as a nation can break down the silos between races, break down those stereotypes of minority populations, Indigenous population and all the other minority groups."

Describing himself as "a very proud Indigenous man from Adnyamathanha tribe" and proud to be an Australian, Goodes added "I'm not here to tell you what to think or how to act or raise your children.

"All I'm here to do is to tell you about my experiences and hope you choose to be aware of your actions and interactions so that together we can eliminate racism."

Having won eight gold medals at the 2012 Paralympics in London, becoming Australia's most successful Paralympian at a single Games, Jacqueline Freney was Young Australian of the Year.

The 21-year-old swimmer won a gold medal for every event in which she competed, and her gold medal haul was greater than any other competitor from any country.