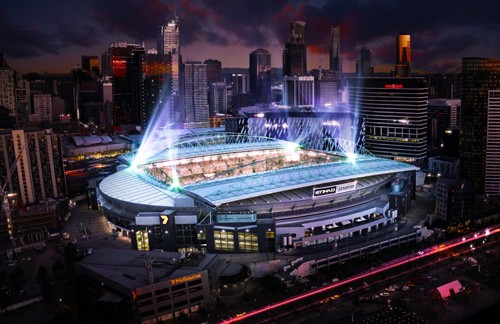 The AFL has today agreed to purchase Melbourne’s Etihad Stadium in a deal believed to be worth around $200 million.

After 15 months of talks, the AFL Commission signed off on the agreement to secure both the management rights and freehold ownership of the stadium last week and the final paper work was completed this morning.

The AFL.com.au website says that the purchase “is a major breakthrough” for tenant clubs North Melbourne, the Western Bulldogs and St Kilda, who will be freed from the restraints of “cash-draining contracts with the outgoing owners”.

The website also suggests that the Essendon and Carlton clubs will also be likely to benefit from the deal.

AFL clubs have to hit an attendance figure of between 25,000 and 26,000 to break even which is less than favourable compared to those clubs who are tenanted outside of Etihad Stadium.

The AFL would have taken ownership of the 54,000 capacity stadium for just $30 in March 2025, but had already been negotiating its early release.

It was reported earlier this year that that league is planning a $300 million upgrade to the stadium’s facilities and adjoining areas outside of the stadium.

In September, AFL Chief Executive Gillon McLachlan flagged the purchase of the stadium telling radio station 3AW “we’ve always said at the right price we’d like to do it.”

With the AFL set to take control of the venue early next month, it has committed to continue running the stadium as a multi-purpose venue hosting other sports and concerts when not in AFL mode.

In a statement AFL Chief Executive Gillon McLachlan advised "owning Etihad Stadium enables the AFL to continue to strengthen the financial health of several of our Victorian clubs, develop an asset for our whole industry, and commit to being a serious stakeholder in the future of the Docklands precinct.

"Stadiums are a vital piece of community and public infrastructure that bring city precincts alive.

"The AFL will continue to operate Etihad Stadium as a multi-purpose entertainment venue hosting AFL matches, other sports, concerts and a broad range of entertainment options.

"Our commitment as owners of Etihad Stadium is to work with government to provide a stadium experience for our fans equal to the best in the world, as well as explore how we can help improve the stadium’s relationship to Docklands and the city."

The 53,000-seat Docklands stadium replaced Waverley Park as an AFL venue when it opened in 2000.

It has been known by several names including Colonial Stadium and Telstra Dome before adopting Etihad Stadium through a sponsorship agreement with Etihad Airways in 2012.

The AFL has been in talks with the Victorian government about renovating the stadium, and better integrating it with the Docklands precinct.

Etihad Stadium Chief Executive Michael Green will reportedly remain in his role with the AFL having no immediate plans to changes the venue's management structure.