AFL looking to take over Etihad Stadium by year’s end 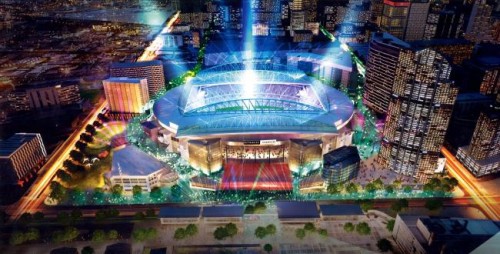 AFL Chief Executive Gillon McLachlan has told Melbourne radio station 3AW that the league is closing in on a deal to purchase Etihad Stadium by the end of the year.

Despite an agreement that the venue will be transferred to the AFL in 2025, the AFL has been pushing for an earlier acquisition for several years.

Speaking to 3AW on Friday, McLachlan stated "we've always said at the right price we'd like to do it ... we've been pretty consistent with that message for a long time.

If it acquires the 54,000-capacity venue, the AFL is understood to want to make substantial upgrades to its facilities and to better integrate the venue with the Docklands precinct.

Reports have suggested the AFL could pay $150 million to own the stadium but McLachlan said the League was still negotiation with stadium management.

Tenant clubs have long been calling on the AFL to take over so they can improve their gate returns from games.

McLachlan said the stadium, which opened in 2000, needed some updating, adding "there's a whole series of aspects that need upgrading. We want to do deals with the tenant clubs so they can make more money.

"We'd like to work with the state government in partnership so the stadium worked more seven days a week and 365 days a year and interacted with the precinct better and stopped being a blockage to the development of New Quay.

"We want to have certainty around access to other sports and events and work with promoters, so we think there's a lot of things we can do."

Image: AFL plans for the upgrading of Eithad Stadium.