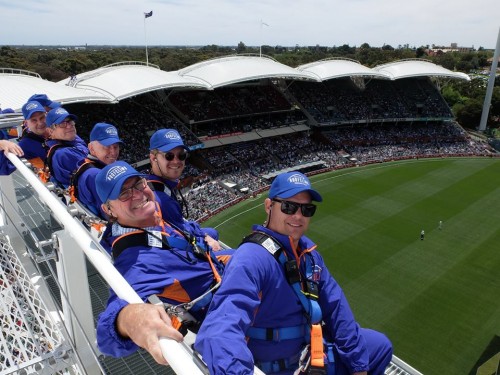 The Adelaide Oval Stadium Management Authority (AOSMA) has been considering adding a zip line that would run from its roof and across the city's River Torrens.

The plan was revealed at a recent South Australian Parliamentary committee hearing into the South Australian Government's proposal to loan the Authority $42 million to build an onsite hotel.

Under questioning from MLC Frank Pangallo, Adelaide City Council said AOSMA had asked what Council permits would be required for a zipline (flying fox) to be installed between Adelaide Oval and another venue.

Lawyer Brett Kahland told the committee that while he could not share confidential details of the idea, "you could infer the trajectory" of the flying fox.

Reflecting moves by sporting venues around the world to broaden their product beyond matchdays, AOSMA Chair Kevin Scarce said that the idea was informally raised "at working level with the Council" more than 12 months ago.

He advised "there are no proposals before the board in relation to this matter.

"We make no apologies for exploring innovative ideas aimed at further growing the oval's popularity, tourism appeal and its brand."

In response, Adelaide Lord Mayor Sandy Verschoor labelled the Authority as "greedy and opportunistic" for wanting to expand commercial activities - such as the hotel - at the venue.

Lord Mayor Verschoor advised that the zip line idea had not been assessed by the Council and that any proposal would need to go through a consultation process.

She advised "the Adelaide Oval (Redevelopment and Management) Act was a tool to redevelop the Oval, not to facilitate the expansionist ambitions of a greedy and opportunistic stadium management authority."

He added "this will clearly compete with other cafes, hotels and entertainment facilities in the area."

The South Australian Government contends that the hotel is necessary to ensure that the Oval will be financially viable into the future.