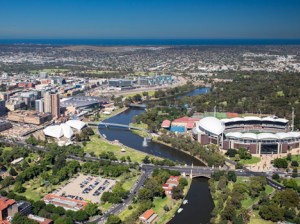 As reported by The Adelaide Advertiser, venues proposed to host Games events included the Adelaide Convention Centre for table tennis, weightlifting, volleyball, gymnastics, boxing and wrestling events; Coopers Stadium for the rugby seven; Priceline Stadium in Mile End for netball and the SuperDrome in Gepps Cross for track cycling.

The Adelaide Oval would be the Games centrepiece, hosting athletics and the Opening and Closing Ceremonies while West Beach was suggested as a possible site for the athletes' village.

Aquatic events would see diving held at the SA Aquatic and Leisure Centre in Marion and a temporary pool installed at the Adelaide Entertainment Centre in Hindmarsh.

With much of the infrastructure in place, the major works for the Games would be the drop-in pool at the Entertainment Centre, a 400 metres athletics track at the Adelaide Oval and renovation to the SuperDrome.

During the tour, a CGF spokesperson advised that Adelaide’s sporting infrastructure was largely "Games-ready" for 2026, 2030 or 2034.

Timing has reportedly already been discussed, with March and October preferred dates to avoid a clash with AFL at the Oval. 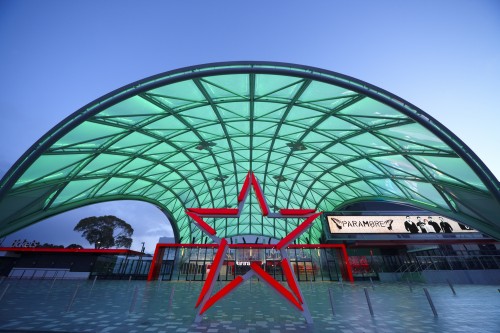 "The Aquatic Centre is limited because of the road so there is only seating on one side.

"The (drop-in) pools are amazing, they're modular, are built and then taken down and can be repurposed to a community."

The 2026 host city is due to be selected at the CGF General Assembly in September 2019.

Other contenders reportedly due to make potential bids are Perth and Western Sydney, Auckland and Edmonton in Canada.

The 2022 Games will be in English city of Birmingham.

Images: The Adelaide Oval would host athletics and the Opening and Closing Ceremonies if Adelaide is to host the Commonweatlh Games (top) while the Adelaide Entertainment Centre would host swimming events with a temporary pool installed (below).