Hotel to be integrated into Adelaide Oval 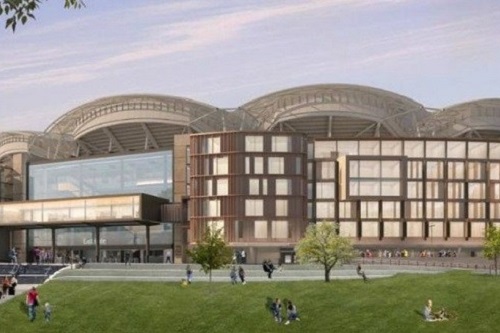 Adelaide Oval will become the first stadium in Australia to feature an integrated hotel under plans revealed by the Stadium Management Authority (AOSMA).

Under the plans, the 128-room Adelaide Oval Hotel will be integrated into the eastern façade of the existing structure and will be open by August 2020 in time for the ICC World T20.

The hotel will be contained within the Adelaide Oval area and will not impact the parklands or the existing plaza.

The design is being overseen by Cox Architecture and project managed by Mott MacDonald, the same team responsible for the award-winning redevelopment of Adelaide Oval.

The boutique hotel will feature two wings that will integrate into the existing design on either side of the East Gate.

The project will be funded by a loan of up to $42 million to be provided to AOSMA by the South Australian Government Financing Authority (SAFA) at commercial rates.

Commenting on the project, Cox Architecture Director Adam Hannon stated “South Australia has a history of firsts, not the least of which was the redevelopment of Adelaide Oval itself. It set new standards and has driven the investment other states are now making in their own facilities.

“We have deliberately designed the hotel to fit as unobtrusively and seamlessly into the design, retaining the magnificent views while not impacting the experience for gameday patrons.

“It’s a low-impact design, not only in the way in which it fits within the current structure but also in the way we can build it without adversely impacting the gameday experience for patrons during its construction.”

Image shows an artist's impression of the Adelaide Oval hotel.