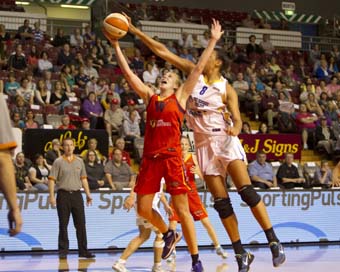 Planned cuts in ABC television's sports broadcasting will have an impact on women’s and Indigenous sport according to sporting bodies.

Asked to find $254 million in savings over the next five years by the Federal Government, the national broadcaster will end coverage of Football Federation Australia's Westfield W-League at the end of the current season, with a similar fate likely to befall the Women’s National Basketball League (WNBL).

With the ABC a key broadcaster of women's sport on free-to-air television, the cuts in the broadcasting of women's sport has led the Australian Womensport and Recreation Association (AWRA) to express fears that young female athletes will be left without role models.

AWRA Executive Officer Leanne Evans says taking the two leagues off the air would leave a gaping hole, stating "you’d struggle to find much at all in terms of women’s sport on television.

“It’d be a massive disappointment for those athletes, teams and people who support it.”

AFLNT has expressed its disappointed that its games will no longer be shown on the ABC.

AFLNT Chief Executive Tony Frawley said axing coverage did not come as a surprise, stating "when you see the amount of cuts right across Australia - we we knew it was going to come.

"Certainly with the cuts that have been organised by the ABC over the last couple of days, it was a fait accompli for us."

Frawley said the cuts would be "a big blow" for Indigenous football fans in particular, adding "it's been great for us to be able to get it out to particularly Indigenous communities that don't get access to the football by coming to the stadiums here in Darwin.

"It will be disappointing not to have the broadcast because we've had such a great relationship with the ABC over many, many years but the cuts just won't make that available.

Sport has been a major casualty in wide-ranging cuts to ABC services, with the broadcaster citing declining interest in local sport in recent years.

In a statement outlining an “overhaul” of its sport coverage, the ABC announced "with the ABC facing declining audience interest in local sport competitions and some codes chasing commercial opportunities, ABC Television is revising its sports strategy to ensure the most cost-efficient use of resources and optimal audience impact."

A Football Federation Australia (FFA) spokesperson said the move would not affect the viability of the W-League, but added “FFA is disappointed with the decision to cut the broadcast of Australia’s premier women’s national sporting competition.”

For the WNBL, the cessation of its broadcasts will end a 35-year partnership.

This week's "overhaul" conflicts with the ABC’s most recent television strategy which states that it has “a long-term commitment to women’s sports”.

Evans suggested top-level teams - including the high-performing Opals and Matildas - could expect to see the impact of a lack of exposure in the future.

She concluded “young girls look up to elite female athletes.

“Without that television coverage it’s just that much harder to see those players and see the pathway ahead of them.”