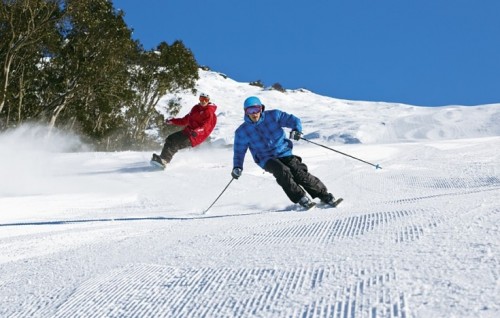 Victorian ski resort Falls Creek will be celebrating the 70th anniversary of its operations during the current ski season.

From humble beginnings with the first ski lodge Skyline, evolving to what is now a vibrant European-style ski village that attracts thousands of snow enthusiasts of all abilities each winter season, Falls Creek is now a thriving all-season resort.

It was the adventurous curiosity and intrepid spirit of like-minded State Electricity Commission (SEC) staff including Ray Meyer, the Chief Surveyor of the Kiewa Hydro-Electric Scheme, who recognised the skiing potential of the snow-covered high plains.

The six SEC employees - Toni St Elmo, Ray Meyer, Jack Minogue, Lloyd Dunn, Adrian Ruffenacht and Dave Gibson (together with their families) - banded together to secretly build a 'hut' that was the first ski lodge at Falls Creek.

Using a road built in 1930s to gain access to Falls Creek the hut project was quite a bold move and was carried out in secret owing to earlier efforts by other skiers being stymied by HHC Williams - the engineer in charge of the Hydro Scheme.

To celebrate its early settlers, and the highlights of the last seven decades, Falls Creek is throwing a week-long celebration from Monday, 7th August. Activities during the week will include a re-creation walk from Howman’s Gap in period wear, some 60s dancers in Slalom Plaza, 70s Hotdog style mogul race and themed fireworks, an 80s disco, 90s trivia in the evening after an afternoon tea with the original family descendants and culminating in a celebration of the 2000’s looking in to the future with a day party at the Corona bar at QT.

Local Historical Society Chair Karen Smythe explains “there couldn’t be a more fitting tribute to the early pioneers and settlers than a week long celebration of the seven decades of Alpine village life.”

To honour the celebration, the Falls Creek Arts and Heritage Trail has also been added to the Falls User Guide, the digital guide to exploring Falls Creek.

For more information go to www.fallsuserguide.com