Zombie hordes to be let loose on the Gold Coast 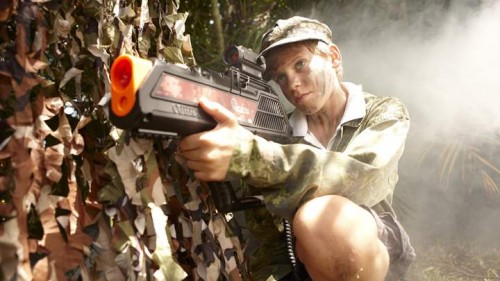 At the forefront of developing attractions based on the increasingly popular horror trend in entertainment, Battlefield Sports will be transforming their Battlefield LIVE gaming experience into Battlefield UNDEAD during October.

Operating at Thunderbird Park on the Gold Coast hinterland, the Battlefield LIVE outdoor laser skirmish game is being adapted so that 'zombies' are the adversary, with the games played within a storyline where all that stands between the zombies and world apocalypse are the gamers.

The zombie outbreak will be limited 100 gamers for each morning and afternoon every Saturday during the Halloween season at a cost of $37 per player. Battlefield Sports are also looking for extras to act as zombies.

Husband and wife team Peter and Nicole Lander, proprietors of Battlefield Sports and inventors of Laser Skirmish have been running live computer games for more than 10 years.

Explaining the Battlefield UNDEAD concept, Nicole Lander states "we are putting out the Casting Call for budding actors and potential academy award winners.

"We are looking for volunteers to act as zombies during our zombie season. Zombies play for free but will need to come in full regalia and make-up.

"There will be plenty of opportunity for you to take selfies for Facebook and, of course, the chance to scare the pants off paying customers!"

The game will see zombies at a 'secret medical research laboratory' and are armed with an infrared gaming gun upgraded with special sounds effects.

Lander adds "our bold survivors start nearby, also armed with infrared gaming guns, and their mission is to battle through the 'Jungle Village' to the 'Police Outpost' to upgrade their infrared weaponry."

The infrared weaponry on the battlefield is award winning and incorporates the patented SATR technology.

The zombies are rigged with infrared sensors so the survivors know when they've got them. Each survivor starts off with a single-shot rifle and if they make it to the way-point they are upgraded to a fully automatic rifle. Meanwhile gaming guns records, in real-time, each survivor's statistics in areas such as K/D ratio and accuracy percentage.

The experience is fun and unique to the growing horror gaming sector. However, instead of running away from the horror as would be the case in haunted house, participants become the hero.

Millions of Battlefield Sports/Laser Skirmish games have been played across more than 40 countries while the business' showcase battlefield is at Thunderbird Park.

Battlefield Sports/Laser Skirmish has also on numerous awards, including being named Exporter of the Year (Arts/Entertainment) in the 2011 Premier of Queensland's Export Awards.