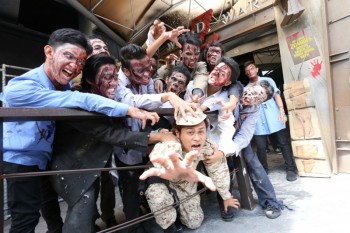 Public interest in 'zombie' based entertainment, with the Hollywood blockbuster World War Z set for imminent release and the popular Walking Dead series on television, is presenting enormous opportunites for laser tag/gaming operators, according to Nicole and Peter Lander of Battlefield Sports.

Speaking on future trends during the Laser Tag forum at the recent Australian Amusement, Leisure and Recreation Association (AALARA) annual conference on the Gold Coast, Nicole and Peter shared their belief that current interest in 'zombie' based media and entertainment will impact on businesses such as theirs.

Suggesting that the interest "can benefit battlefield businesses right now", Nicole Lander explained "depending on your audience, 'zombie' games can be presented in a variety of ways; from 'G' rated family fun, to 'R' rated thrilling experiences."

Attended by a cross-section of laser tag operators, AALARA's Laser Tag forum also heard from Kate Holmes from Zone gave a brief history of laser tag in Australia, with Holmes explaining how laser tag, once the preserve of owner-operators, had been impacted in recent years with larger corporations such as AMF and Strike Bowling adding laser tag to their new existing entertainment facilities/FECs.

Sam Kelly from Laser Force added a presentation on trend away from stand-along laser tag centres and towards multi-activity facilities/FECs with laser tag arenas combining with attractions such as bowling, high ropes course and/or go-kart tracks.

Outgoing AALARA Board member also advised of the potential for state/territory governments to legislate and impact on laser tag sector and the need for ongoing lobbying and liaison with governments.

Mark Fewtrell from Laser Skirmish CQ will now take on this role.

For more information go to www.youtube.com/watch?feature=player_embedded&v=EHjltzZ0T8Q