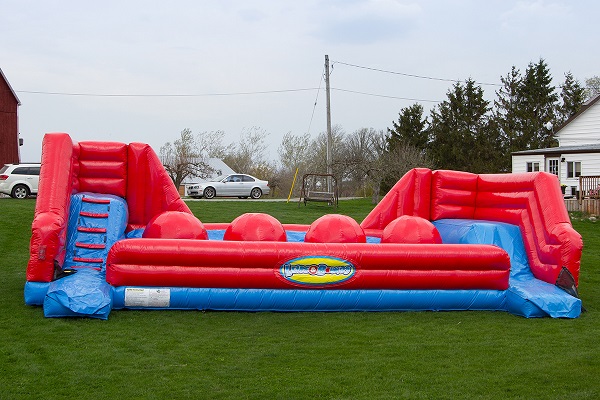 The prosecution by the Office of the Work Health and Safety Prosecutor against the inflatable amusement ride company and its two directors was finalised in the Holland Park Magistrates Court at the end of last month. The company was charged under s.19 and s.32 of Queensland’s Workplace Health and Safety Act, with two directors also charged under s.27 and s.32 of the Act.

The Court heard that in the 2017 September school holidays, the company had hired the south-side Brisbane sporting facility where 17 inflatable amusement devices were installed. At the direction of the company directors, the inflatables were secured with ropes and straps to various points, including fences, goal posts and wheelie bins filled with water.

One of the rides was the ‘Big Baller’, a large inflatable with a series of fixed inflated balls where the challenge is to jump from ball to ball. The Big Baller has 26 anchor points to secure it safely, but on the day of the incident only eight were used - and those points were not secured in accordance with the manufacturer’s instructions.

On 29th September 2017, wind caused the Big Baller to become airborne with approximately half of the ride lifted over the fence behind the ride, with the boy falling at least 3.1 metre to the ground. He suffered leg fractures and other soft tissue injuries which required surgery, as well as ongoing physiotherapy and occupational therapy support.

After the incident, the Big Baller was put back in its original position and reinflated for use by patrons as per the director’s instruction.

Magistrate Debbie Turner said not properly securing all the anchor points was not in line with manufacturer instructions, or the company’s own manual, and that there was poor training of staff and inadequate assessment of the weather conditions. It was significant and an aggravating factor that the ride was returned to service a short time after the incident.

The Magistrates Court were told that the defendants had taken significant post incident measures and engaged an engineering company to certify the setup and use of their inflatables on outdoor hard surfaces.

The company was fined $50,000 while the defendants were given two-year good behaviour bonds, with recognisance of $15,000 each.

Fees and costs were nearly $1,600. No convictions were recorded.

Image: A Big Baller inflatable believed to be of the type involved in the September 2017 incident. Image used for illustrative purposes only.