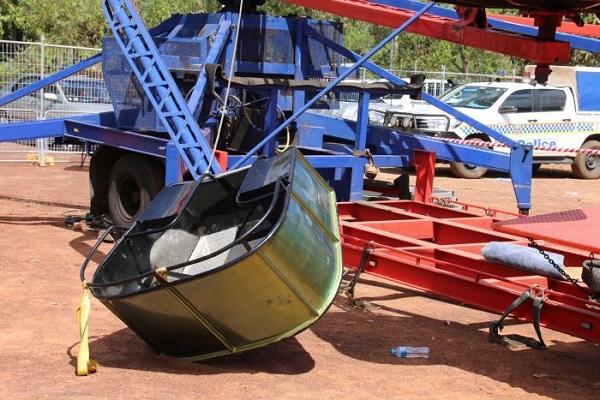 A safety alert has been issued by the Northern Territory's work safety watchdog warning of a risk of "serious injury or death" if amusement rides are not properly inspected and tested for faults.

The alert follows investigations into an accident at the Freds Pass Show in May, which left one woman injured and 10 children temporarily trapped after a ride called The Octopus malfunctioned, sending a gondola crashing to the ground.

The review by NT WorkSafe has found problems with corrosion on the ride's "sweep arm" as well as potentially inadequate testing of the ride's structural integrity by its operator.

TNT WorkSafe has also revealed it found cracks in the main shaft of a separate swinging chair ride, operated by a different company at another event in the NT earlier this month.

With thousands of Territorians set to attend the Alice Springs, Katherine and Darwin shows over the next month, NT WorkSafe has warned operators that they must ensure their amusement rides meet Australian standards.

NT WorkSafe stated "the purpose of this safety alert is to highlight the risk of serious injury or death if amusement rides or devices are not inspected and tested to the appropriate standard."

The alert describes the factors that contributed to the accident in May and lists the actions required of operators to various standards.

In the case of The Octopus ride, the safety watchdog said its inspection of the buckled metallic arm "showed signs of previous welded repair work in two locations along its length, possibly affecting the structural integrity".

NT WorkSafe said an audit of records indicated that non-destructive testing may not have been conducted on the ride as frequently as required under Australian guidelines.

Following the initial buckling, the ride continued to rotate for two more revolutions before it finally stopped spinning.

The watchdog said this was partly due to the ride's inadequate brake, adding "an absence of a protective cover on the brake disc led to contamination affecting the efficiency of the brake, which contributed in the ride performing two full revolutions before coming to a stop."

Image shows the Octopus ride after the 18th May incident at the Freds Pass Show. Courtesy of the ABC.