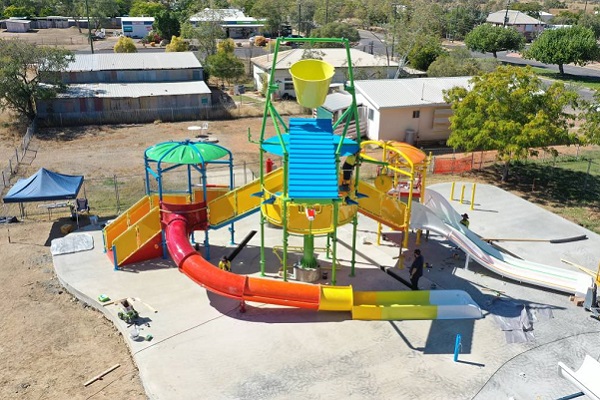 Winton Shire Council has advised that a $1.7 million aquatic playground is expected to be open by the end of the month.

Having prioritised youth engagement in the town, Winton Shire Council has constructed the aquatic playground inside the swimming pool compound, jointly funded by Works for Queensland Program and Council.

Advising that the project would improve livability especially in the warmer months, Council Chief Executive Ricki Bruhn stated "with high temperatures throughout the year, the aquatic playground will provide kids with another option for recreational fun and physical activity.

"The community is really excited, and eagerly awaiting the finalisation of this project."

Bruhn explained that local children into the planning and design process, noting that Councillor Tina Elliott and Council Technical Officer, Charles Dyer last year "worked with both Winton State School and St Patrick's School children on what elements they would most like to see in a play space.

"The children were shown a range of stimulus and were able to vote with star stickers on the elements they liked the most. This was followed up with a brainstorming session - much of which formed the final design.

"(The contractor) Playscape provided beautiful renders of a Waltzing Matilda themed splash pad but Council and the children of Winton had spoken and wanted slides." 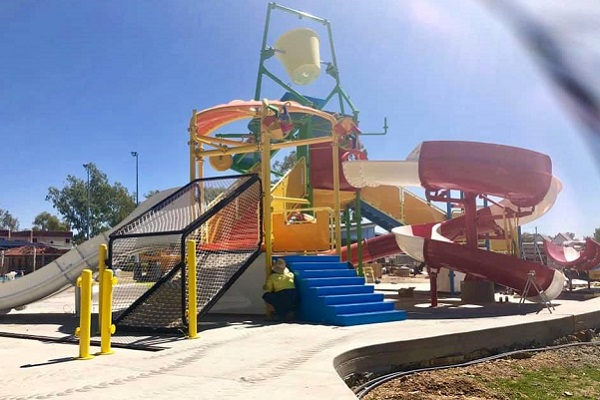 All the planning and design work was completed by March 2019 and works began onsite the first week of June.

Bruhn noted that "the plant room, filtration, disinfection and pumping equipment are all installed. The Aquatower is in place and the final plumbing is close to completion."

Commenting that the aquatic playground would be complete around 20th September before the Winton Outback Festival, Bruhn added "we hope to give local school kids the opportunity to try it out before the official opening,

"To cater for all ages the playground is also augmented with a toddler space, with half a dozen ground sprays and a rain cap mushroom."

Shade structures and outdoor furniture will also be installed before Christmas.