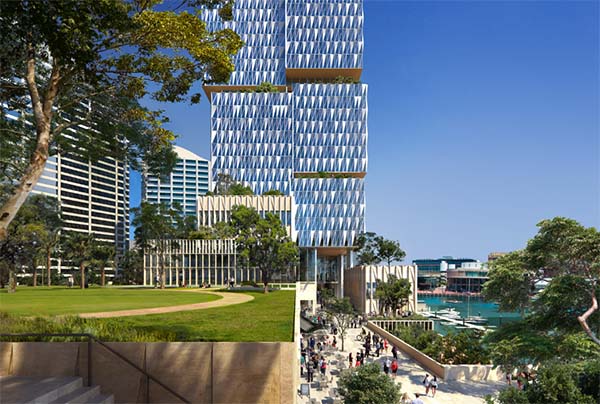 The Cockle Bay Park redevelopment design presented by Danish architecture firm Henning Larsen has been selected as the winning concept for the $650 million office and retail redevelopment of Sydney's Cockle Bay Wharf.

The Copenhagen-based firm was part of a shortlist of six architecture groups chosen in September 2019 to take part in an international competition to design the redevelopment of the 2.5 hectare site situated between Pyrmont Bridge and the Western Distributor.

The Cockle Bay project, which is 75% owned by the GPT Group and 25% by AMP Capital received Stage 1 development approval in May last year from NSW Independent Planning commission.

To be built on Darling Harbour waterfront, the winning design includes a 183-metre office tower as part of a wider development encompassing 75,000 metres2 of commercial space, 14,000 metres2 of retail space, and between 6,000 and 15,000 metres2 of open space presented as an elevated park over the eight-lane Western Distributor, which has separated the wharf from the city since the 1970s.

NSW Planning and Public Spaces Minister Rob Stokes enthused about the design which will also include new waterfront shops, restaurants and bars “this area will be a great example of how we can deliver new tower developments that also have a great benefit to the public, with almost a hectare of new public space to connect the city to its harbour.”

“The scheme has the potential to enhance Darling Harbour as a precinct, providing a distinctive office tower, retail podium and public open space while significantly improving pedestrian connections between the CBD and Pyrmont Bridge.”

As reported in the AFR, GPT’s head of office and logistics Matthew Faddy noted the redevelopment would set a new benchmark for office building design in the Sydney CBD adding “the quality of the entries produced for this competition were exceptional. Cockle Bay Park will deliver cutting-edge workplaces, leading sustainable design (6 Star Green Star), and a significant new public place for the community along with a world-class retail, entertainment and dining precinct.” 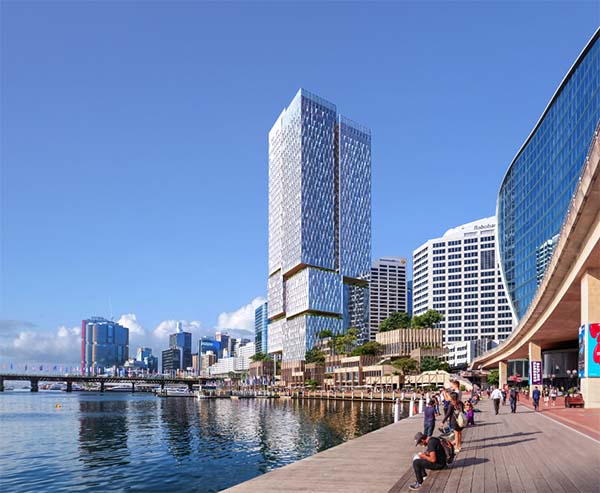 AFR also report that AMP Capital managing director of office and logistics Luke Briscoe is delighted with the design that “brings to life our aim to reconnect the harbour and the city by creating a new expanse of public open green space.”

Henning Larsen partner Viggo Haremst added “we are incredibly proud to have won this important design competition in the heart of Sydney. Cockle Bay Park links the city to the waterfront at Darling Harbour, and we are excited by the opportunity to design a destination that is distinctly human-scaled while also offering world-class retail, office, and public space.

"Sydney is unique in how it entwines a friendly local atmosphere within a cosmopolitan city – we see Cockle Bay Park as an opportunity to reflect this and to emphasise the best of what Sydney can be.” 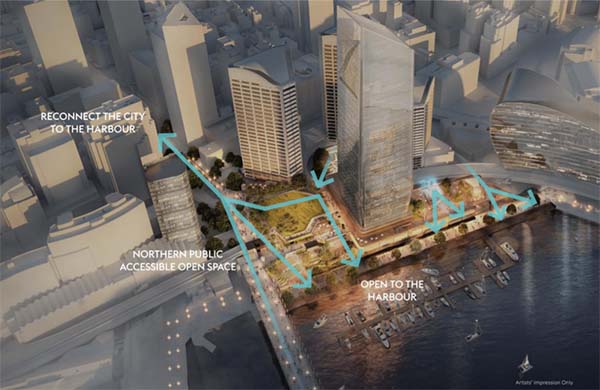 The Cockle Bay project was announced in 2016 but has suffered delays and opposition from detractors of the proposed tower, including the City of Sydney and the National Trust who raised concerns that the Cockle Bay tower would overshadow the proposed public space known as Town Hall Square (THS). The tower will be located opposite the Town Hall and bounded by Pitt, Park and George streets.

City of Sydney Lord Mayor Clover Moore noted that THS was one of the few locations in central Sydney that enjoys sun until 6pm, due in part to its proximity to the heritage buildings of the Queen Victoria Building, Town Hall and St Andrew’s Cathedral. Lord Mayor Moore is concerned that the proposed Cockle Bay tower will block the sun from THS from 4pm.

The Cockle Bay project’s Stage 2 development application is to be lodged to the Department of Planning, Industry and Environment. The proposal will be exhibited for public feedback and the applicants will be required to address community issues before the Department conducts a rigorous assessment of the proposal.