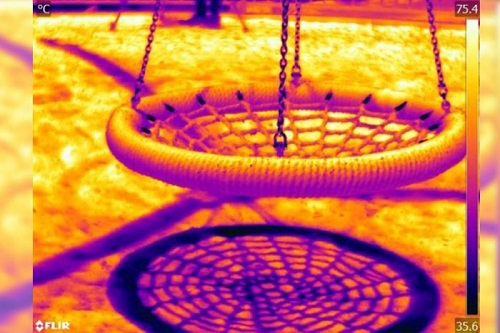 With Australia’s current heatwave having a massive impact on outdoor play and recreation, urban ecosystem scientist Dr Sebastian Pfautsch of Western Sydney University is creating a standardised measurement of playground performance and safety in high temperatures through the development of a star rating system.

The system follows a 2018 report from the University found that on an average summer day, play surfaces and equipment could reach dangerously high temperatures.

Dr Pfautsch, a Senior Research Fellow at the University, found that artificial turf surfaces in childcare centres could hit up to 98C, while a rubber tyre left out in the sun for children to play with had a temperature reading of 105C.

An initial assessment by Dr Pfautsch of a playground at Holroyd Gardens in Western Sydney, which is partly sheltered by shade sails and has a mix of playing surfaces, showed data well over an air temperature of 38C.

At midday, the sunlit blue rubber flooring in the play area delivered a reading of 90C while the section in the shade measured 46C.

Dr Pfautsch told the ABC "it's a huge temperature difference within a metre.

"Running on the sunlit surface at 80-plus degrees - you feel it very quickly on the soles of your feet."

Explaining globe temperature - a combination of incoming solar radiation, reflected heat from a surface and air temperature - Dr Pfautsch, advised “that's why I need to go out on very hot days and very cool days to study how these surfaces behave at a standard temperature.

"This is one of the reasons not a lot of research has been done on this topic, because it's hard work.

Dr Pfautsch is hoping local governments will see the benefits of his system and back it with co-funding. Until then, he is pushing ahead with his work and plans to analyse 30 to 50 playgrounds predominately across Western Sydney.

The ranking system will be ready by next summer.

He added “it's a tool for councils and a decision-making tool for the public so they can show responsibility when it comes to summer heat and so they can advise parents.

"It will help parents choose where to go with their kids; it might be a great playground to use, but not good for summer."

Dr Pfautsch said the ratings would range from zero to five stars, with the best playground likely being aquatic and zero depth playgrounds.

Alex Harmon, editor of family activity website Ella's List, said she would include Dr Pfautsch's star ratings in their regular reviews of playgrounds around Sydney.

The reviews currently rate playgrounds based on their levels of shade, proximity to a cafe and whether the park is fenced.

Harmon advised “the biggest gripe for us and myself as a parent is the lack of shade in Sydney playgrounds.

"You have to think twice about taking your kids to a playground, because if there is shade it usually doesn't cover the whole playground.

"A lot of new playgrounds have metal slides and they get just so hot.

"Those two things need to be worked on and we need a guide for parents to know what they're in for."

Image: A swing in the sun recorded a surface temperature of 75 degrees (top, courtesy of Dr Sebastian Fautsch).