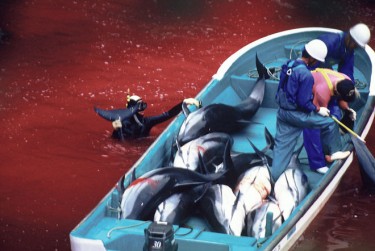 Having been targeted by conservationists earlier this year, the world zoo and aquarium body chose to suspend JAZA following a unanimous vote at a recent meeting of its governing council.

Marine conservationists had accused the international body of approving the infamous dolphin hunts in Taiji, Japan by association, with Australia for Dolphins leading a group in taking court action against WAZA.

The hunt sees the dolphins forced into shallow waters before being slaughtered or caught for public display in aquariums.

The hunt has gained increased notoriety in recent times thanks to  documentary film The Cove, which shows the brutal manner in which the  highly-intelligent cetaceans are being hunted.

JAZA, which represents aquariums which have taken dolphins from these hunts, rejected a WAZA proposal for a two-year suspension on the practice.

A WAZA statement outlining its action, explained “JAZA responded (to the suspension) by proposing guideline changes that would put restrictions on the method of capturing dolphins and improving animal care, but because it did not restrict taking animals from the drive, WAZA has concluded that a satisfactory agreement could not be reached and voted to suspend the Japanese association’s membership.

“The basis for the suspension is a determination that JAZA has violated the WAZA code of ethics and animal welfare.

“Moreover, the council reaffirmed its position that members must confirm that they will not acquire dolphins from the Taiji fishery.”

WAZA has more than 20 associate members, with a further 300 individual zoo members, including London Zoo, Melbourne Zoo and the Zoological Society of San Diego.