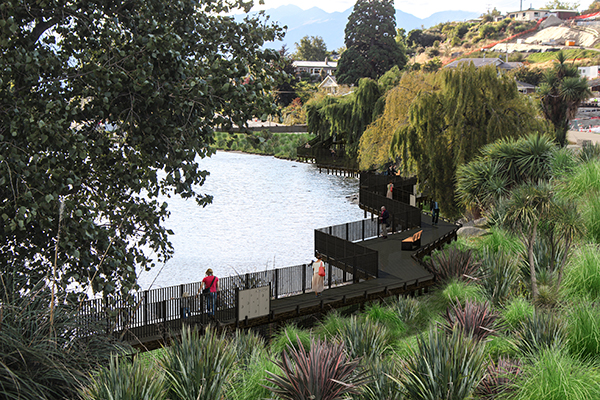 Work on Stage Three of the Wānaka Lakefront Development Plan is to begin on Monday 1st February 2021, which will see the implementation of native planting, a shared pathway for pedestrians and cyclists along Lakeside Road, and a separate boardwalk along the lake's edge.

Queenstown Lake District Council Community Services General Manager, Thunes Cloete was excited to see Stage Three coming to life, saying that once finished, the ecological and accessibility improvements realised along the lakefront would be something Wānaka's community could be proud of.

Dr Cloete advises "we consulted on a Concept Plan for this site in June 2019 and received overwhelming support for its direction and what Stage Three aims to achieve.

"Once finished, wide scale native planting will run from Bullock Creek through to the Marina, working to maintain the area's rugged and natural look while also providing an injection of native flora and fauna."

Stage Three’s main contractor Blakely Construction planned to stagger work on different features of the site, delaying construction of the boardwalk until after April to avoid any disturbance to nesting and breeding Grebe in the area.

Environmental protection methods would also be in place during the project, with the utilisation of silt curtains and sediment pumps, netting for capturing debris and scaffolding platforms all aimed at protecting the lakefront.

Wānaka Community Board Chair, Barry Bruce was looking forward to watching Stage Three’s plans and designs becoming reality, noting that the underutilised land from the Marina through to Bullock Creek would become a real destination for both locals and visitors to the town.

Bruce added "both pedestrians and cyclists will be able to move through the area with a greater level of safety and ease once work on Stage Three is complete.

“Residents and visitors will also have new spots to sit and enjoy a picnic on the lakefront, and yet another vantage point from which to enjoy some of the best views in Wānaka.”

Work on Stage Three of the Wānaka Lakefront Development Plan will require some changes to Lakeside Road traffic and access to the lakefront during the project, with a number of closures scheduled to take place.

Pedestrian and cycle access along Lakeside Road will be maintained throughout the project.

Work on Stage Three of the Wānaka Lakefront Development Plan is set to be concluded in August 2021.