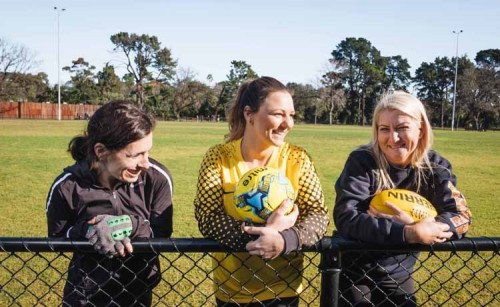 Coinciding with today’s commencement of VicHealth’s inaugural This Girl Can Week, the health promotion agency has released a report highlighting barriers that women encounter when looking to participate in exercise.

Commencing from today (Monday 18th March) and running until 24th March, This Girl Can Week is encouraging Victorian women to give physical activity a go or return to exercise after a break.

The Week sees a range of fun, free or low-cost activities hosted by gyms and sports clubs across Victoria, tailored to women and girls who want to get active but aren’t sure about how to take the first step.

It aims to build on the momentum created by the highly successful campaign which launched in March last year and inspired one in seven Victorian women to get moving in 2018.

A VicHealth statement advises “the campaign features everyday Victorian women instead of professional athletes or airbrushed Instagram models and is about empowering women to feel comfortable in their bodies and in public spaces - regardless of their ability, how they look or how sweaty they get.”

While This Girl Can Week is promoting positive messages about women’s physical activity, VicHealth’s latest research reveals the devastating impact women’s experiences of judgement while exercising has on their capacity to begin or maintain physical activity.

A diverse group of women aged between the ages of 18-65 shared distressing stories of being shamed for being too ‘fat’ or ‘ugly’ to be physically active. Half of the women surveyed said they had actually experienced being heckled and judged.

As a result, many worried about the way they looked when exercising, including being sweaty, breathless, red-faced or having their bodies ‘jiggle’. Others told of their guilt at prioritising their own needs after having children with some being told they were bad mothers for using childcare so they could exercise and that playing sport and being active was a “given” for men but not women. Other research findings included:

• Women believed men judged them in a sexualised way, whereas women were critical about their clothing, capability and body appearance.
• Groups and small cliques in small exercises classes were very disconcerting and overhearing gossip also made women feel judged and unwelcome.
• How women are represented in social media, advertising and the media also contributed to fears about not being good enough.
• Judgement from family members was also particularly devastating, with some women stopping exercise after disparaging remarks from their husbands and children.

For many, the experiences of judgement were so negative, and fears so overwhelming, that women withdrew from exercise altogether, or did not start in the first place.

One woman told of her experience after being abused by a group of men while out walking.

“They rolled their window down and said to me ‘oh, do you work in a bakery?’ and I’m like ‘oh, no’, and they said ‘oh, well, you’ve certainly got enough rolls’... I didn’t walk in town again.”

Commenting on the research, VicHealth Social Marketing Manager Melanie Fineberg advised “women say they’re being shamed for being too fat or ugly when getting physically active. They’re told they’re bad mothers if they prioritise their own health.

“Women are telling us it’s not only men yelling out at them when they’re exercising in public, but their own husbands and children are making comments about how silly they look.

“Women are also judging women with comments about their appearance and clothes.”

Fineberg said the research showed that there was a lot more work to do to empower women to get fit and healthy, adding “one in five women are doing no physical activity in a week. They’re not only missing out on benefits for their physical health, but also mental health and social connections.

“We all have a role to play in creating a society where we are supportive of people getting active regardless of where they are from, what they look like or how old they are.”