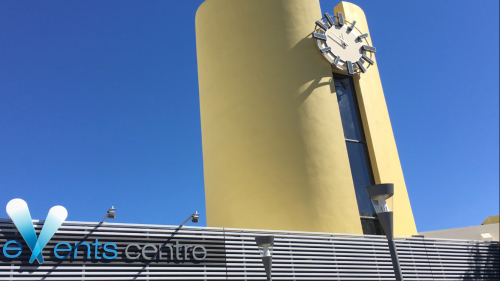 The Sunshine Coast Council project has improved the dated brick façade with render, significantly changing the look of the building.

The Events Centre Chairman Councillor Tim Dwyer, who joined the project team and Events Centre management on site today to inspect the new façade, said the $800,000 upgrade had transformed the appearance of the centre.

Councillor Dwyer stated “i addition to rendering and painting the brickwork, we have improved the existing Perspex elements on the clock tower with a new clear glass skylight and a new 2.5 metre clock.

“It’s important that a major civic venue of this stature has a look to match and this project, funded through council’s Capital Works Program, will achieve that.

“This project has not only addressed exterior maintenance requirements, including repairing deteriorating mortar joints which will provide on-going operational savings for rate payers, but will present the building with an attractive modern façade.

Sunshine Coast Council is currently awaiting the outcome of a $3 million grant application with the Australia Government under the Building Better Regions Fund to support further redevelopment of The Events Centre with upgrades of air conditioning, functionality, presentation, and patron and disability access.

Image: The new look facade at The Events Centre in Caloundra.

25th May 2017 - EXTERIOR MAKEOVER IN PLAY AT THE EVENTS CENTRE, CALOUNDRA