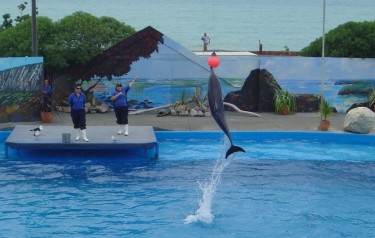 Napier's Marineland, one of Hawke's Bay's top tourist attractions since the mid-1960s, could be turned into a bus depot.

The attraction, on the city's Marine Parade seafront, closed at the end of last year after it emerged that it had unlawfully captured wild seals and when visitor numbers dropped sharply after its last dolphin died.

However, about 50 animals, including seals, sea lions and penguins, remain at the wildlife attraction, which is costing Napier City Council over $600,000 a year to maintain.

Options for the site, according to documents obtained by Wellington-based newspaper The Dominion Post under the Official Information Act, include an adventure park or water park while an ambitious redevelopment plan, based on work by Wellington company 3D Creative, has been examined by the council. However, Mayor Barbara Arnott says the $11 million-plus cost is not affordable meaning that there is no chance that Marineland will reopen in anything like its present form, though the possibility of keeping some of the animals in a new attraction has not been ruled out. No decisions have been made on finding new homes for the remaining animals.

The Council has a resolution on its books that, if Marineland is shut permanently, the site will be used for a new tourist attraction with a "wow factor".

However, Council sources say that anything with a genuine wow factor now seems to be beyond the council's budget, and the Marineland replacement will be something more modest.

One of the three main options being investigated by council staff and consultants is a transport link.

This would be for public transport running along Marine Parade, where most of the city's top tourist attractions are sited, and probably past the port to the busy seaside suburb of Ahuriri.

Councillor Mark Herbert said he wanted a vintage tram to run this service but Mayor Arnott said she would prefer a specially styled bus with an art deco look.

The other options for Marineland - an adventure park or water park - would be aimed at family entertainment, but each would have the disadvantage of largely being summer attractions.

Some of the infrastructure for a water park is already in place, and council staff are still looking at different ideas for an adventure park.

However, the council is prepared to look at other ideas for the area, so long as they are financially sustainable.

But Friends of Marineland Chairman Cliff Church said the council was taking too long to make decisions and did not seem to be taking the matter seriously.

Church explains that Napier people had shown through a petition, a survey and submissions to the council that they wanted Marineland kept and revamped.