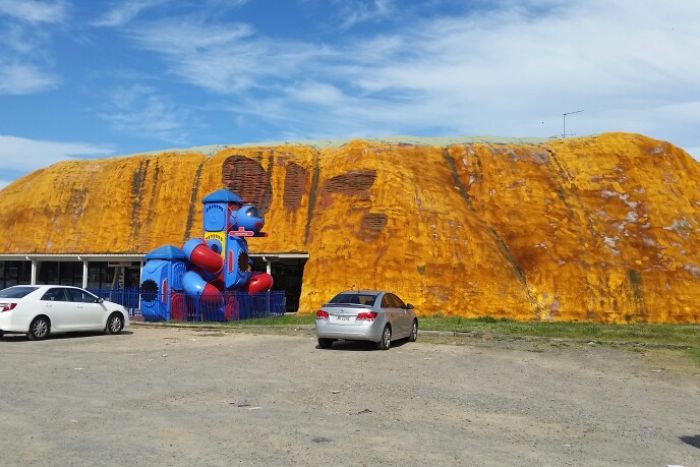 A well known ‘big thing’ on the Pacific Highway north of Newcastle, resembling Uluru, was destroyed in a fire early yesterday morning.

Fire ripped through The Rock Roadhouse near Hawks Nest on the NSW mid-north coast and the 10 metre high Uluru replica - a site popular with passing motorists - is now no more.

Inspector Ben Shepherd from the NSW Rural Fire Service said 18 crews were fighting the fire and ensuring it did not spread to nearby petrol bowsers.

Shepherd told the ABC"it is a local landmark and it is well known by many who travel that route, but unfortunately the structure has been completely destroyed by fire.”

The 1/40 Uluru replica was built for the Leyland Brothers World amusement park in the late 1980s. However, since the attraction closed in the 1992, the ‘big thing’, located next to a service station, has merely been a visual attraction.

Shepherd told the ABC "it is a local landmark and it is well known by many who travel that route, but unfortunately the structure has been completely destroyed by fire.”

Co-creator Mal Leyland said he was devastated that his the attraction was no more, advising "I put it behind me many years ago when we lost it (the amusement park) to the banks, and you think it's dead and buried back in the memory somewhere 20-odd years ago, but nah it's not the case.

"All of our money went down the gurgler when we lost it, so I had a strong emotional attachment and I feel quite devastated even though we had no connection with it now."

In recent years the building was used as a service station and the broader site hosted up to 45,000 school students a year on bush camping excursions

Image: The Uluru replica was built in the late 1980s as part of the Leylands Brothers World amusement park. Courtesy of Wiki.