South Australia’s Larry the Lobster ‘big thing’ up for sale 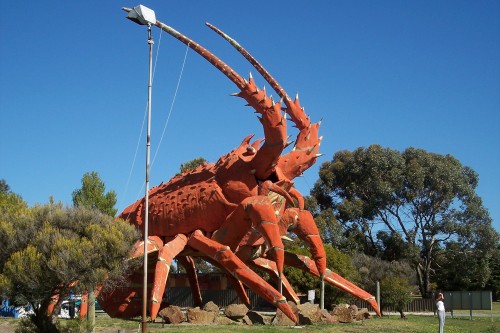 Larry the Lobster, a landmark ‘big thing’ in the South Australian coastal town Kingston SE is on the market.

Larry's owners, Jenna and Casey Sharpe, have put the 17-metre tall lobster, and the restaurant he sits in front of, up for sale, having recently completed a $50,000-plus makeover of the local icon.

Explaining the sale, Casey Sharpe told the ABC “we haven't got the time to run the business. It's time to find someone with the time and the drive to get the restaurant back up and running.

Sharpe said post-makeover Larry now looked like "a million dollars" and was drawing more tourists than ever before.

He added “hopefully someone comes in with a lot of ambition and a bit of money behind them … it's just got so much potential.”

Sharpe admits a restaurant with a 17-metre-tall fibreglass lobster in front of it is a big undertaking for any buyer and said they would consider selling Larry and the restaurant separately.

More than $30,000 was raised last year via a GoFundMe page to restore the giant fibreglass crustacean.