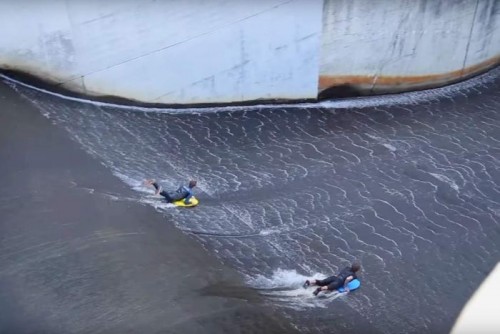 Tweed Shire Council has threatened to end public access to a dam in northern NSW after video footage emerged of young people using bodyboards to surf down a dangerous 110-metre concrete chute.

Video of the ‘illegal waterslide’ on the spillway of the Clarrie Hall dam, originally filmed in May 2016, was shared on Facebook last week, prompting Tweed Shire Council to warn locals off the practice.

The Council’s Manager of Water, Anthony Burnham, told the ABC it put thrillseekers at a significant risk of drowning, stating “(the spillway has) got a large flip bucket at the end and, with any significant flow, you can be held underwater in that flip bucket. You can be rendered unconscious and drown.”

Other videos posted to YouTube showed footage of similar stunts from as early as 2011.

In 2013 a video sparked calls from local Police to end the practice, while a video from 2011 showed two men sliding down the spillway in an inflatable raft.

The latest video amassed 10,000 views after being posted to YouTube in May last year. On 25th September, an edited version was shared on the Facebook page Culturetrip, attracting 40,000 likes and reactions, and 3 million views.

Commentary with the video advises “daredevils are using this dam as an illegal waterslide. Make sure you seek permission first.”

Burnham said the Council had attempted to use CCTV to deter the practice in the past and was now considering a public closure of the Clarrie Hall dam.

The spillway chute is lined with six-metre to eight-metre high walls and narrows to only 12 metres across for much of its length.

The dam has a storage capacity of 15,000ML and a catchment area of 60 60 kilometre². The dam, but not the spillway, has traditionally been open to the public year-round during business hours.

Image and YouTube video show the Clarrie Hall dam in use as a waterslide.