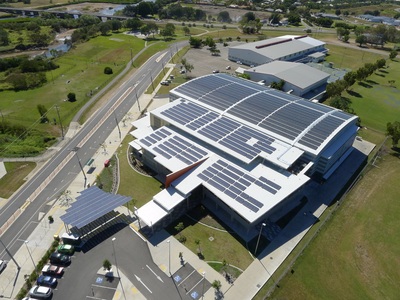 The recently opened Townsville RSL Stadium has been acknowledged as the largest solar power system in North Queensland.

The roof of the new sport stadium is topped with $2 million solar farm consisting of 1,800 solar panels which meet two-thirds of the stadium's energy requirements.

"The clean energy produced here equates to cutting 460 tonnes of carbon pollution each year or taking approximately 100 cars off the road."

The stadium project is part of the Townsville Solar City Program funded by the Federal Government, which has helped install more than 1 megawatt of solar PV in Townsville, cutting carbon pollution by 64,000 tonnes.

Globally 'solar stadiums' are becoming commonplace; in an effort to not only reduce associated carbon impact, but the substantial costs involved with powering facilities.

Other significant solar stadium developments include the Gillette Stadium in Foxborough, USA, the Pituaçu Stadium in Brazil and the main stadium constructed for the World Games 2009 in Kaohsiung, Taiwan. In Australia, the Metricon Stadium on the Gold Coast and the Bankstown Basketball Stadium project are seen to have demonstrated industry best practice in solar farming.

For more information go to www.townsville.qld.gov.au/facilities/sports/rsl/Pages/default.aspx