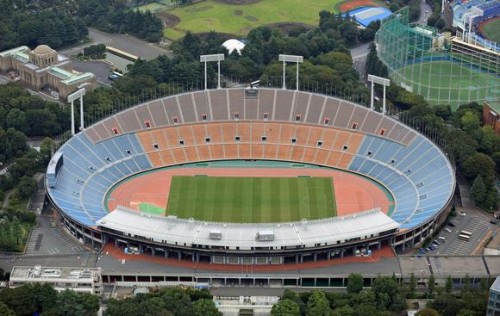 The Japan National Stadium in Tokyo is to receive a US$1.3 billion upgrade in preparation for the 2019 Rugby World Cup and as the potential main venue for the 2020 Olympics, for which Tokyo is currently bidding.

If successful with its tender, the new-look Japan National Stadium, located close to Tokyo's bustling centre, would double in size with up to 100,000 seats.

Explaining the plan, Japan Rugby Football Union Chairman Tatsuzo Yabe told media "we are in talks with the stadium owners and Tokyo government about it being the venue for both the World Cup and the Olympics.

"We have to knock down the current National Stadium - it is old and only has a capacity of around 50,000."

Yabe said plans would include retractable seating, similar to the revolutionary Sapporo Dome, the hi-tech jewel in Japan's crown at the 2002 FIFA World Cup with a 'floating' pitch, Yabe stating "it will have seats which can be moved in when we need the track for the Olympics and back for ball games like football and rugby."

The Japan National Stadium was built for the 1964 Olympics, the first to be held in Asia. It also staged the world athletics championships in 1991 and FIFA's Intercontinental Cup from 1980 to 2001.

Japan's Olympic bidders had planned to construct a new stadium on Tokyo Bay for the 2016 Games, before the city lost out to Rio de Janeiro in the International Olympic Committee (IOC) voting.

During the bidding process, the IOC had raised concerns about emergency evacuation with three sides of the stadium facing the sea.

For the Rugby World Cup, Japan has many other arenas available besides the main National Stadium. The 10 grounds which were used at the 2002 FIFA World Cup are possible choices, Yabe added.

The complete project for the new stadium would be worth Y100 billion ($1.3 billion) and would see the new venue completed by 2018.