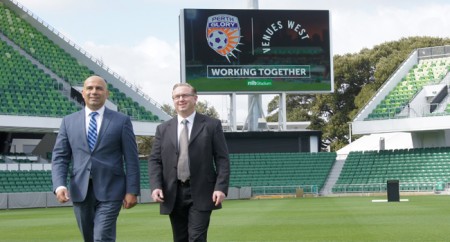 Perth Glory has sealed a new venue agreement with VenuesWest to make nib Stadium its home for the next three years, and with an option for a further two.

The new Deed of License agreement signals the intent of the club to secure and support the development of the venue as the home of major Perth Glory fixtures in Western Australia in the longer term.

The new agreement is the result of close collaboration, consultation and goodwill on behalf of senior staff of Perth Glory, VenuesWest and nib Stadium.

Perth Glory Chief Executive Peter Filopoulos was delighted on the finalisation of the agreement, stating "the importance of a stable and strong venue arrangement cannot be underestimated by any means and it is a subject very close to the heart of all A-League clubs in what still is very much a fledgling league.

"It is a very important component to the ongoing viability of not only our football club but the promotion of our game in this state and I am very pleased to see the nature of the deal that has been reached here.”

Having worked in a senior commercial capacity at Etihad Stadium for many years, Filopoulos has experience on such venue arrangements.

He added "all parties need to be on the same page in a negotiation such as this and in many respects the ultimate outcome is the same.

"It is clear that what has been achieved here is the result of a clear understanding of each of the parties objectives not only for the immediate future but longer term and that is highly pleasing.

“The ultimate winners in all of this will be fans of Football and Perth Glory and for that I would like to thank David Etherton, CEO of VenuesWest, Peter Bauchop, CEO nib Stadium and Perth Glory Board member and former COO, Mr John Boardman for their hard work in bringing this to fruition”

While the agreed terms remain undisclosed, Perth Glory has revealed that nib Stadium will be available at a significantly reduced hire arrangement for ‘community fixtures,’ such as the Westfield FFA Cup and Westfield W-League matches.

On the back of the stability this new arrangement, Perth Glory is very much looking forward to the development of a long term relationship with VenuesWest and nib Stadium aimed at continuing to improve and deliver high quality match day experiences for all football fans.