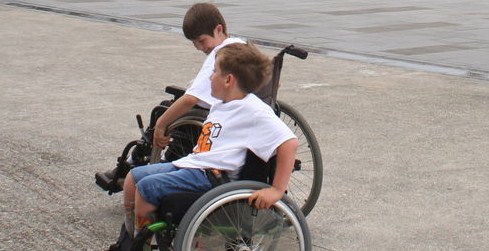 Marking United Nations International Day of People with Disability on Wednesday (3rd December), The Cube, who support and inspire young people with disabilities to do amazing and unexpected things, broke the Guinness World Record for the ‘longest line of moving wheelchairs’, at Auckland’s Mount Smart Stadium.

The record breaking initiative saw 247 people in wheelchairs move together in a single line, for two minutes, around the Mt Smart’s athletics track, smashing the previous record of 193 previously set by the Christopher and Dana Reeve Foundation in Los Angeles.

Young people, Cube staff, supporters and members of the public of all abilities gathered for what proved to be a spectacular day.

Guided by their Youth Engagement Group (YEG), The Cube attempted to break the world record in 2013, but fell short on numbers. This year, with support from local home care equipment brands Invacare and Active Rehab, who generously donated wheelchairs for the event, proved to be a huge success.

Descendants of the Thompson family, who established Invacare, joined the procession with New Zealand’s two oldest wheelchairs, dating back to the 1800s. Bringing together old and new to break the record proved just how capable people with disabilities are of achieving inspiring and unexpected goals.

YEGG Chair Josh Fuimaono stated “it’s been awesome, getting everyone together in such a show of support.

“We’re thrilled to have broken the record, and it’s especially important given the significance of today. It’s demonstrated that people with disabilities are motivated and have something to give others.”

The world record was a special celebration, designed to promote an understanding of disability issues and mobilise support for the dignity, rights and wellbeing of the 17% of New Zealand’s population who live with disabilities.

“Breaking this world record is enormous, and it’s demonstrated what we know people with disabilities are capable of.”

Following the record, The Cube turned on a ‘Festival of Good Ideas’, with food, entertainment and appearances by local celebrities, which celebrated diversity, and gave people an opportunity to meet new friends, have fun and network within the disability sector.

“The enthusiasm has been infectious. People have come from all over the country - we’ve had school groups, we’ve had all sorts of people show up and get involved, and that’s what we’re all about.

“We couldn’t have asked for anything more.”