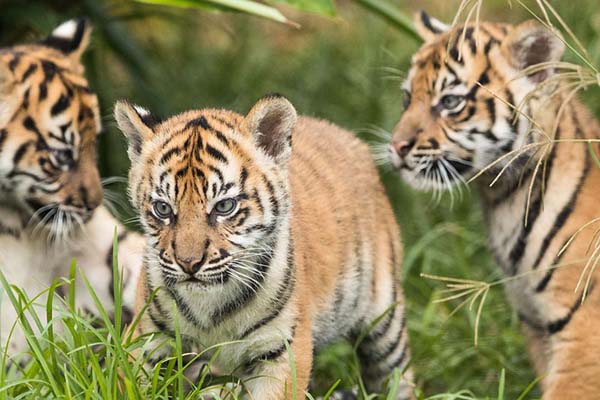 The 10-week-old cubs - one male and two females - are part of the critically endangered sub-species, which only has less than 400 wild tigers left on the Indonesian island of Sumatra.

The little tigers were born to eight-year-old Kartika on 17th January, as part of a regional breeding program for Sumatran tigers.

Since their birth, the cubs have gone from strength to strength, opening their eyes, learning to walk independently and play with each other, and they are now beginning to eat meat while still suckling their mother’s milk.

The cubs are increasingly rare in the wild due to devastating jungle clearing for unsustainable palm oil plantations and the illegal wildlife trade. Taronga’s Tiger Trek, where the cubs can be seen, shows guests how simple shopping choices can help protect the Tigers’ habitat in the wild.

Mandy Everett, Precinct Manager of Exotics at Taronga Zoo Sydney said that she couldn’t hope for better ambassadors for their wild counterparts.

“This is the first time that they have walked outside the Tiger dens with their mother, which has uneven terrain for them to explore. The dens have smooth, flat ground which helped when they were first learning to walk, so they will still be a little unsteady for a while yet,” said Everett.

“Moving to the Tiger Trek Ranger Station also poses a challenge for Kartika, who could keep her cubs together in the dens. Now that they are moving about a larger space and learning to climb terrain, she will have a much harder time controlling them,” Everett said.

“This birth is such a wonderful success for the conservation of this fragile species, and I am so excited that we can now invite guests to share our joy,” she said.

“It’s such a shock that these three little cubs represent one per cent of the remaining wild population but with zoo-based conservation programs worldwide and the support of our guests here in Sydney, there’s still hope for the future of this species,” she said.