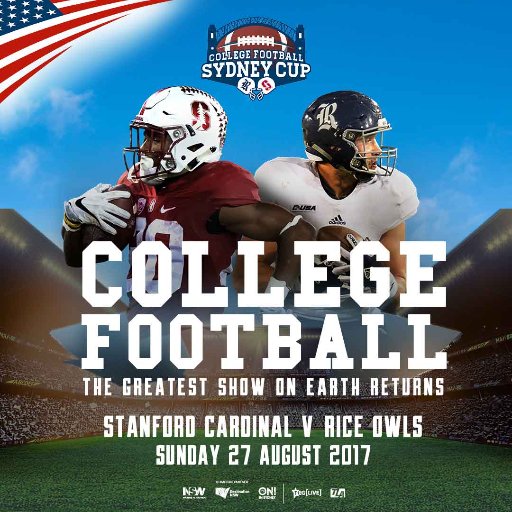 Hundreds of American college footballers and support crew have arrived in Sydney ahead of Sunday’s College Football Sydney Cup at Allianz Stadium.

Following the success of the inaugural event in 2016, the Sunday 27th August match will see the Stanford University Cardinal and Rice University Owls face off in the NCAA football season opener.

Australian NFL legend and stadium member Colin Scotts believes bringing the Sydney Cup closer to the city will take the event to a whole new level in its second year.

Scotts explains “the field at Allianz is purpose-built for American Football. It’s right in town and it will be an electric atmosphere, we’ll be able to carry the party on, which is the great advantage of having the stadium there.

“This is the first game of the NCAA season. It’s a big deal to have it on showcase again. It just shows you the power of Sydney and to bring it to Moore Park off the back of last year will make it even more successful.

“The game goes for three and a half to four hours but fans will be continually entertained. America knows how to put on a show better than anybody. The food alone, along with the cheerleaders, the music, the band and the whole razzmatazz is amazing.”

Scotts calls American (gridiron) football the most “explosive, intense and complex game in the world” but believes the college style is the perfect introduction for Australian fans.

He adds “the crowd may not understand what’s going on but they will be amazed by the hits, the speed of the game and how far they kick the ball in the air,” he said.

“College Football is faster, it’s more exciting and it’s got a lot more passion and soul than the NFL. The following these teams have and the love for their players is unmatched, even in the pros.” 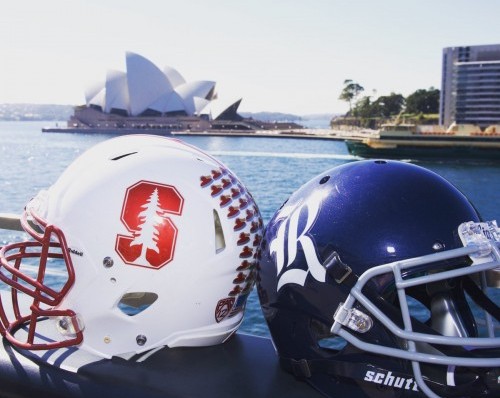 The event, much like the Major League Baseball Series Opener between the LA Dodgers and Arizona Diamondbacks at the SCG in 2014, is a unique opportunity for fans and event organisers.

The SCG Trust, TLA Worldwide, TEG Live and Destination NSW are charged with the responsibility of making it a success. Work is under way to stage the Sydney Cup, which will inject more than $19 million of visitor expenditure into the local economy.

The action on the field will be an experience like no other for Australian sporting fans but the activities around the edges are equally important – none more so than the food.

Trading in sausage rolls for hot dogs and meat pies for doughnuts, venue caterer Delaware North, has created a menu with a southern flavour including a decadent chili beef empanada, a Texas barbeque pulled pork roll and American hot chicken wings and chips.

The event promises to be an education in American culture and football, with the game to be broadcast by ESPN and Fox Sports, sharing the experience with millions of people around the globe. 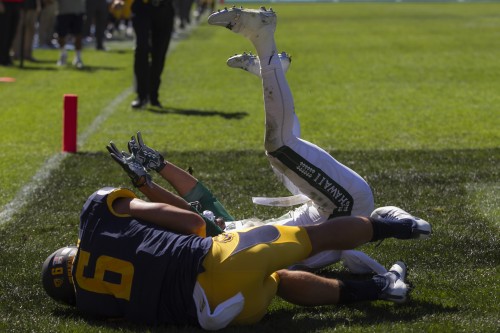 Sideline entertainment will also be part of the afternoon, with live callers to take fans in attendance through exactly what’s happening on the field during stoppages. Then there’s cheerleaders, a marching band and a fan zone to complete the match day experience.

“People who attended the 2014 Major League Baseball Opening Series between the Arizona Diamondbacks and Los Angeles Dodgers embraced the atmosphere and excitement, and are still taking about it today.

“I’m sure fans who attend the 2017 College Football Sydney Cup will do just the same, making the most of the opportunity to see the world’s most explosive sport live at Allianz Stadium.”

The standalone occasion requires significant planning for stadium groundstaff, who will mark out the field to 120 yards long and 53 yards wide, inset with two end zones and five and ten-yard lines.

The only set of football posts in the country have been shipped to Sydney, and will be planted into the ground on a single footing at either end of the field, rising 30 feet off the ground.

There will be plenty happening outside of the gates as well with Driver Avenue to host a pre-and post-game tailgate party - a one-stop shop for merchandise, American cuisine and live music. It is shaping up as a must-see event on the Australian sporting calendar with tickets selling fast for the biggest show on turf this winter.

The event is expected to see more than 19,000 domestic and international visitors contribute more than $14 million in visitor expenditure.

The Stanford Cardinal program, representing Stanford University in the Pacific 12 Conference, has a decorated history with 15 conference and two NCAA national titles in their record books. The system produced NFL legend John Elway and currently has 35 players in the NFL, including the Seahawks Super Bowl Champion, Richard Sherman and Colts quarterback, Andrew Luck.

The Rice University Owls, based out of Houston, Texas, also compete in Division One of the NCAA tournament but in the West Division. In addition to producing a number of current and former NFL players, Rice University is well known as the school where John Heisman was head coach for three years, who the trophy for College Football’s most outstanding player is named after.